try not to crash it
Note: this was made in KSP v1.11.1 - It may not function as intended in KSP 1.12.3
download ckan meta-file
This craft has been added to your downloads queue. Use the KX Mod to fetch it when you are next in KSP. Enable deferred downloads to make this the default way to download.
Download craft with the KerbalX Mod
how to install
re-download

Or find other craft;
- made by gc1ceo
- that use the same mods | that are compatable | with similar mods
- that have a similar part count
Hangars that contain this craft
Bluedog / Tantares | Payloads 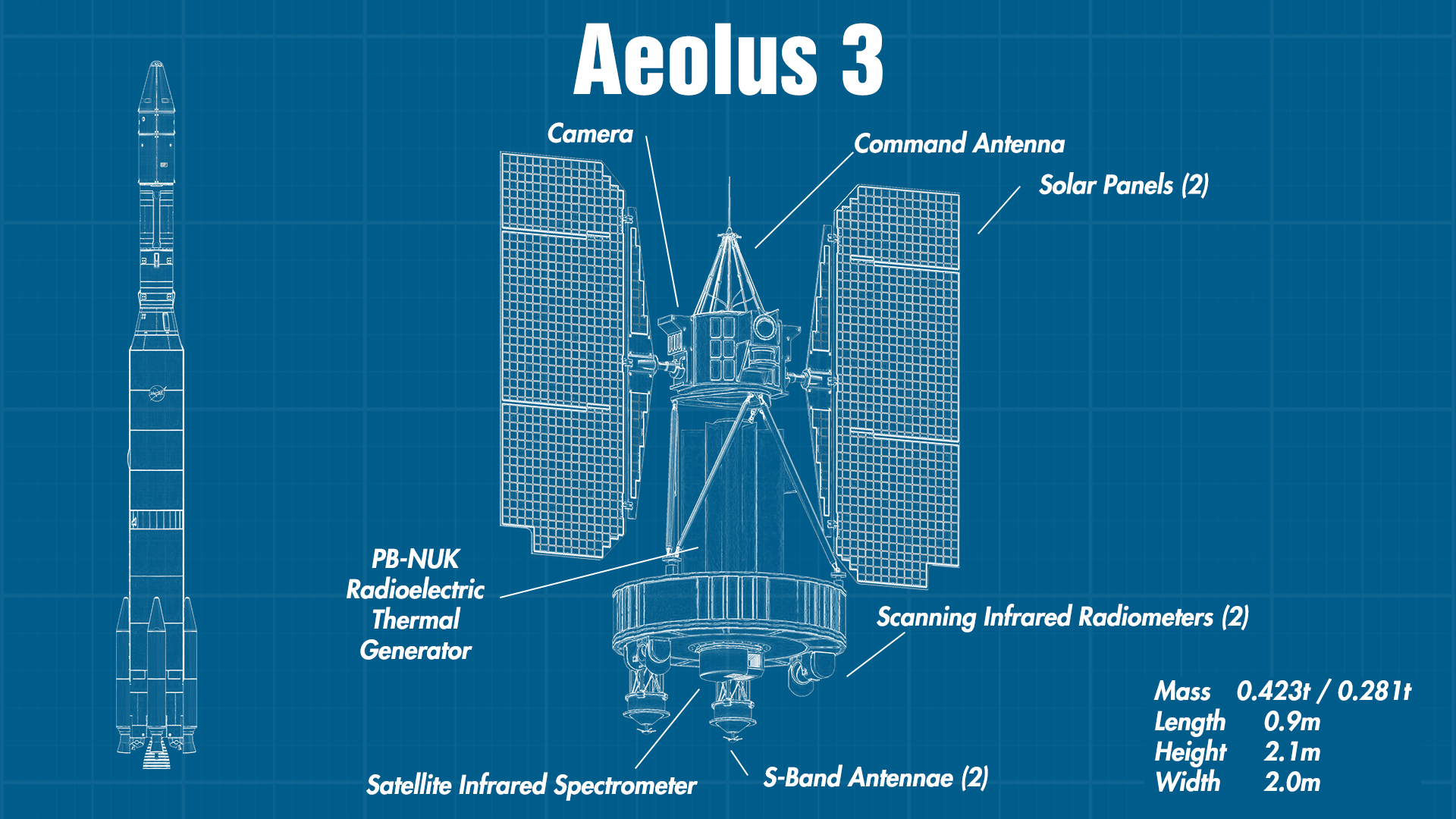 The first generation of weather satellites, TIROS, initiated in 1958 was fairly successful with ten satellites launched between 1960 and 1965 and provided the world the first live footage from a satellite with the TIROS program continuing to evolve all the way to NOAA 19 in 2009. It also paved the way for the use of weather satellites which have become a regular staple of Earth studies and weather forecasting to this day.

The Nimbus program was initiated as a second-generation follow-up to the TIROS program with a larger and more advanced satellite. There would be seven of them successfully launched between 1964 and 1978 with each having more advanced systems including the use of the first RTG and GPS with Nimbus 3. The program drastically changed weather forecasting on a global scale and allowed for a multitude of observed factors to allow for finer and more accurate forecasts especially of dangerous weather such as hurricanes.

The first Nimbus satellite went up in 1964 and after more than a month had successfully completed its mission even though there were electric issues as the solar panels were locked into a single position. The second Nimbus satellite went up a year and a half later with a mission similar to the first. It operated without issue for two months until the failure of one tape recorder with the two tape recorder failing a number of months after the first. However it still provided some usable real time data until 1969 when its horizon scanner finally failed.

The Nimbus B-type satellite would incorporate a number of experimental instruments including the first to carry a radioelectric thermal generator (RTG) into space. The RTG used the natural decay of certain radioactive elements to generate heat which in turn generated electricity. It had been part of a series of experimental atomic batteries which would later be used on a number of satellites and to power Apollo lunar experiments. The second was the first use of Global Positioning Systems (GPS) which would later become a regular staple of life on Earth and is frequently used to this day for positional data like driver assistance.

The first attempt to launch a B-type satellite failed when it was destroyed by the range safety officer in 1968 but luckily the radioactive payload was recovered. The second attempt the following year was successful and Nimbus 3 was launched in April 1969. The satellite operated normally until July when the first of the experiments failed. The experiments would slowly fail one-by-one until September 1970 when the horizon scanner failed and the satellite’s operations were terminated two years later. It was deemed a success and proved the operational ability of both the RTG and the early GPS.

The Nimbus 3 satellite was launched on-board a Thorad SLV-2G with an Agena-D upper stage. The Thorad was a version of the Thor-Agena which had both a longer fuel tank and assisted by a set of three Castor booster rockets. The 2G version used Castor-1 booster rockets while the 2H version used newer Castor 2s.

The Aeolus 3 is an approximation of the Nimbus 3 from Bluedog Design Bureau and is similar to the earlier Aeolus 1 but with the addition of a RTG which can provide power even when the satellite is shaded from being powered by the solar panels. It can operate indefinitely due to its solar panels although the experimental RNG can also keep it powered.

The Fenris SLV-2G is an approximation of the Thorad SLV-2G and also technically the SLV-2H and Fenris-SLV-2A due to the lack of different parts. It operates like most Fenris rockets with the addition of more fuel and three Dioscuri booster rockets which help it overcome the greater mass with the larger fuel tank and the payload. The booster rockets burn to exhaustion but aren’t jettisoned after which the main Fenris rocket should continue to accelerate with minimal losses. It should put the payload at space, or at least the edge of, after which the Belle D will take over the ascent and the orbital burn.

The historical mission profile should put it in a fairly circular orbit around 1,000 km but there’ll probably be enough fuel in the Belle D to make additional changes.