Or find other craft;
- made by RundownPear
- that are also pure stock
- that have a similar part count
Hangars that contain this craft
Experimental | KSP Save 2 | The perfect fleet | Flagships 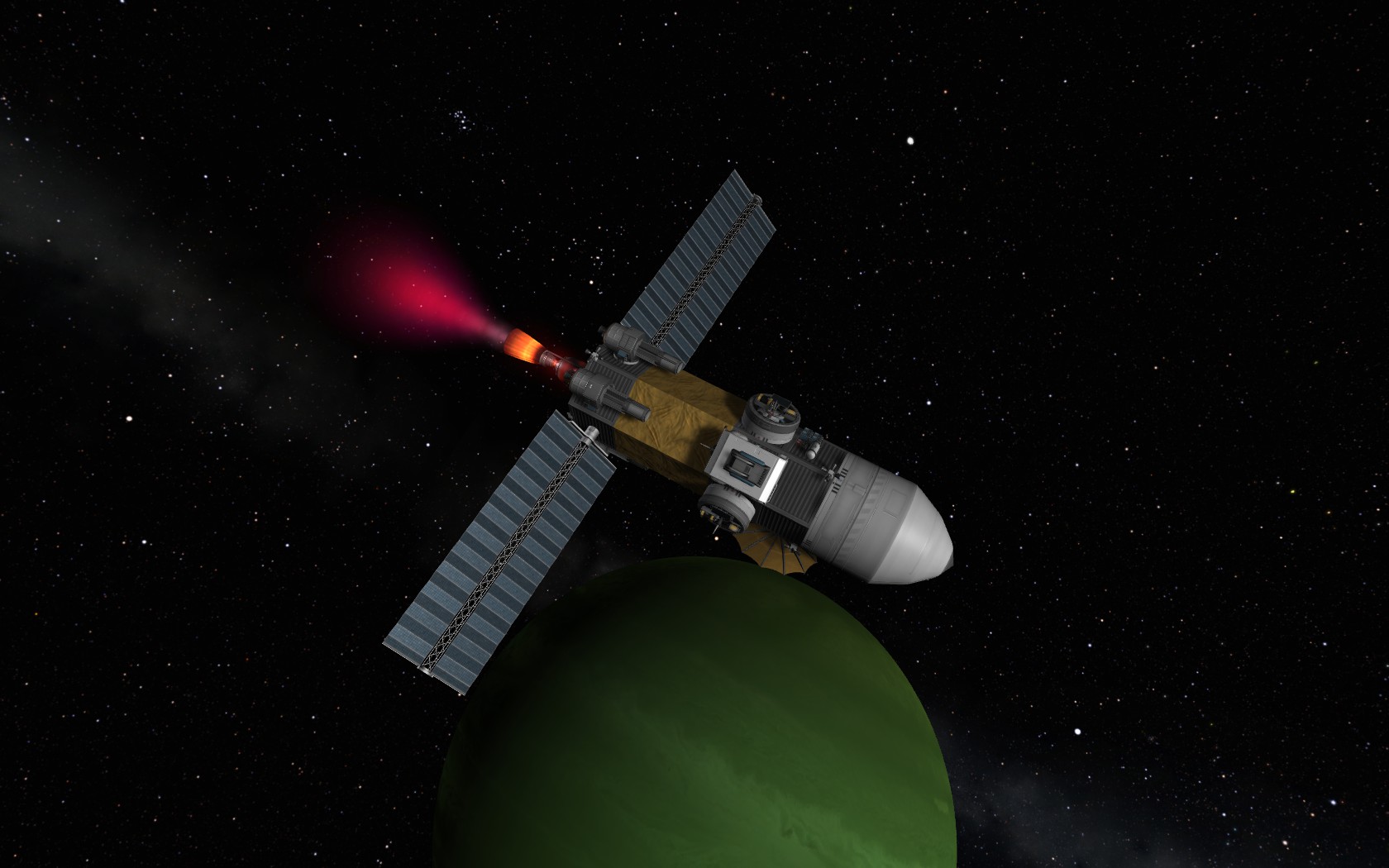 Is a 20 ton Laythe probe really necessary? Yes, yes it is. Originally designed as an orbiter, than a lander, than a rover, the KSC design team just decided to make it an all-in-one. The vehicle contains just about everything needed to thoroughly study Laythe and the other Joolian moons in 1 go. The craft includes 4 orbital probes, 3 landers, 1 atmospheric probe, 1 rover, and the mother ship which contains lost of valuable equipment. It launches on a A-22 rocket which famously launched the first manned Duna missions as well as an interstellar probe called the 1000 year telescope. This vehicle could also hypothetically support advanced exploration of Eve and maybe Duna although you may need more parachutes. Its main mission is to discover if Laythe is habitable or not, I won’t spoil the answer for you.

The Discovery is the main component of the entire mission. Powered by a single nuclear engine and equipped with both solar arrays and a nuclear reactor, it is one capable vehicle. Boasting 5000+ d/v with its detachable breaking stage tanks, it can ferry vehicles to different moons and orbits in the Jool system (my mission focused mainly on Laythe). Mounted on its nose is the Layhte lander and radially attached are all the other probes. It also includes a deployable rader scanner that also functions as a comms unit. Once rover is deployed, it reveals a massive scanning dish to perform even more advanced surface observations. 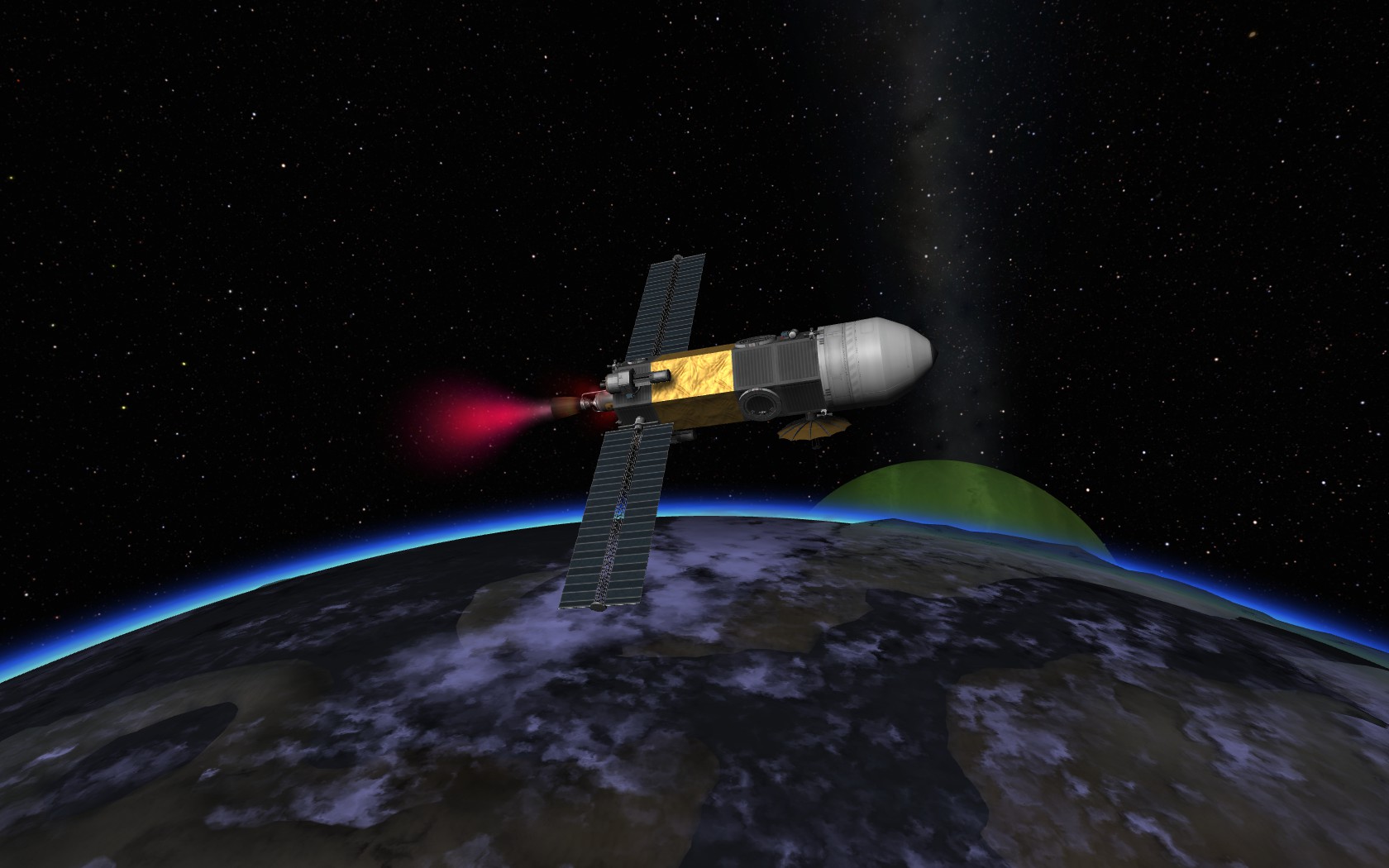 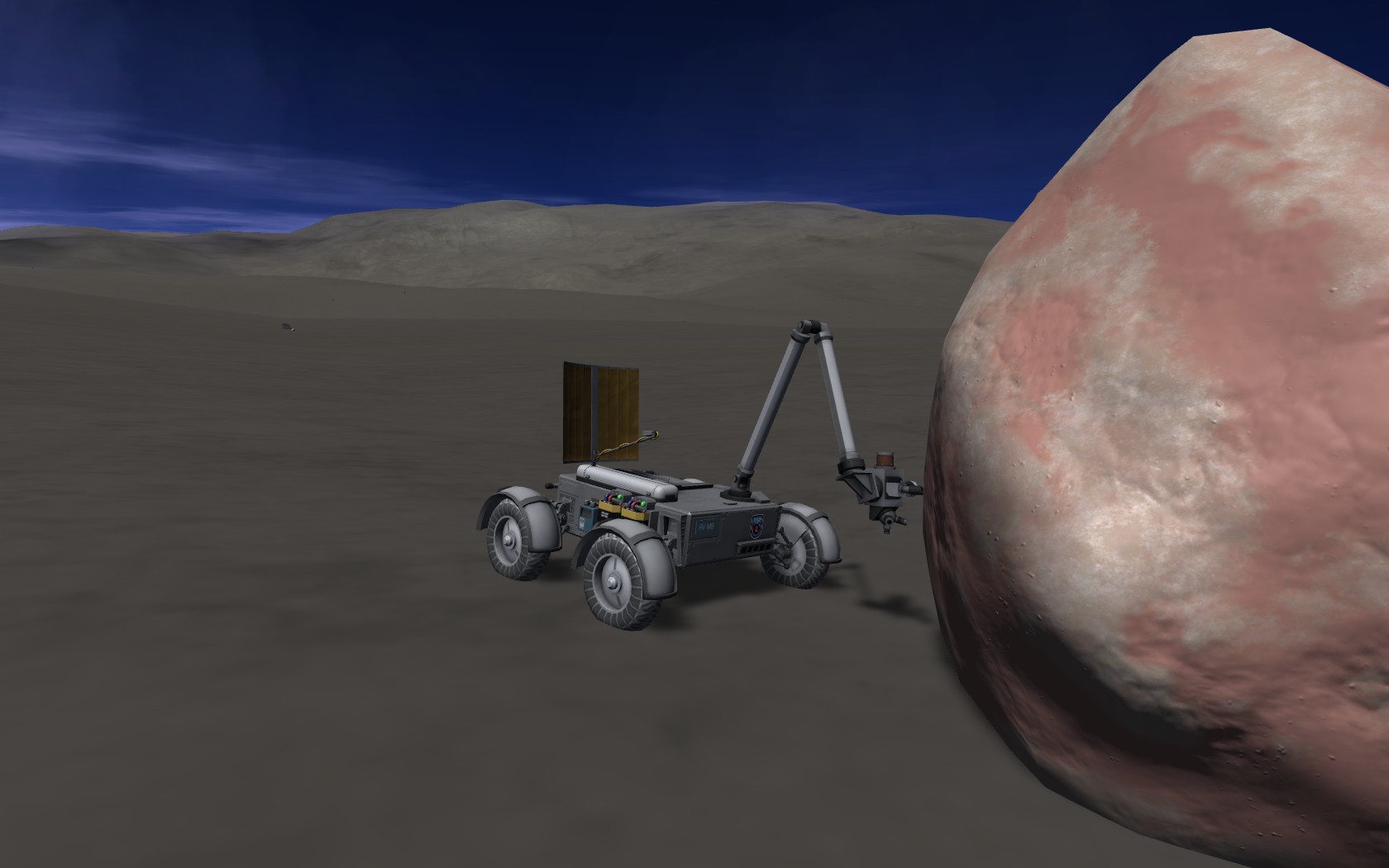 Arguably the second most valuable part of the vehicle, the rover is a long duration exploration platform for the surface of Laythe. It is equipped with many expiriments and sensors along with RTGs. It has a designed lifespan of 3 years but hopefully will be able to last much longer than that. It also has room for a scanning arm if you have the Breaking Ground DLC. Like the other landers it is unpowered and requires the Discovery to deorbit it.

Orignally, the Interstellar Probes from the 1000 Year Telescope were to be reused for this craft but they were two heavy and too expensive. Instead a new simple vehicle was built and designed. It can perform basic orbital science and ahs enough d/v to change orbits a bit and perform flybys. If done correctly you could probably get one of these to hit all of Jool’s moons, most I got was a Laythe, Tylo, Vall encounter. Four for these are strapped on to the Discovery to leave behind in valuable orbits once the main craft is ready to move on. 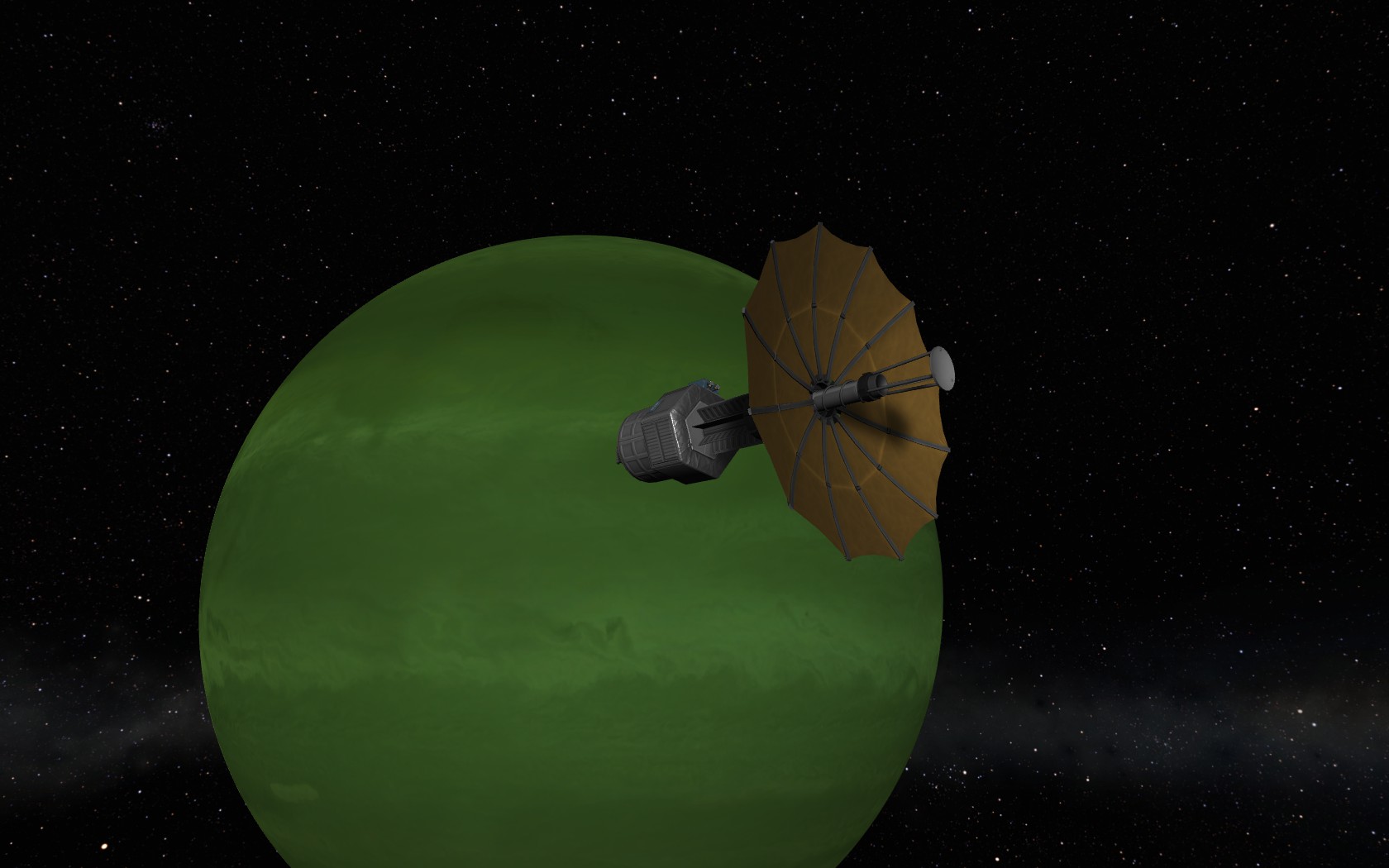 Mission planners realized it would be stupid to attempt to land a rover on Laythe without testing it first. As a result they included three simple landers to visit both the land and sea of Laythe and make sure landing there was viable as well as take initial readings from the ocean. Although they only lasted a few hours, these vehicles helped the KSC planners determine whether Layhte was habitable or not. Like the Rover it is unpowered and requires the Discovery to deorbit it. 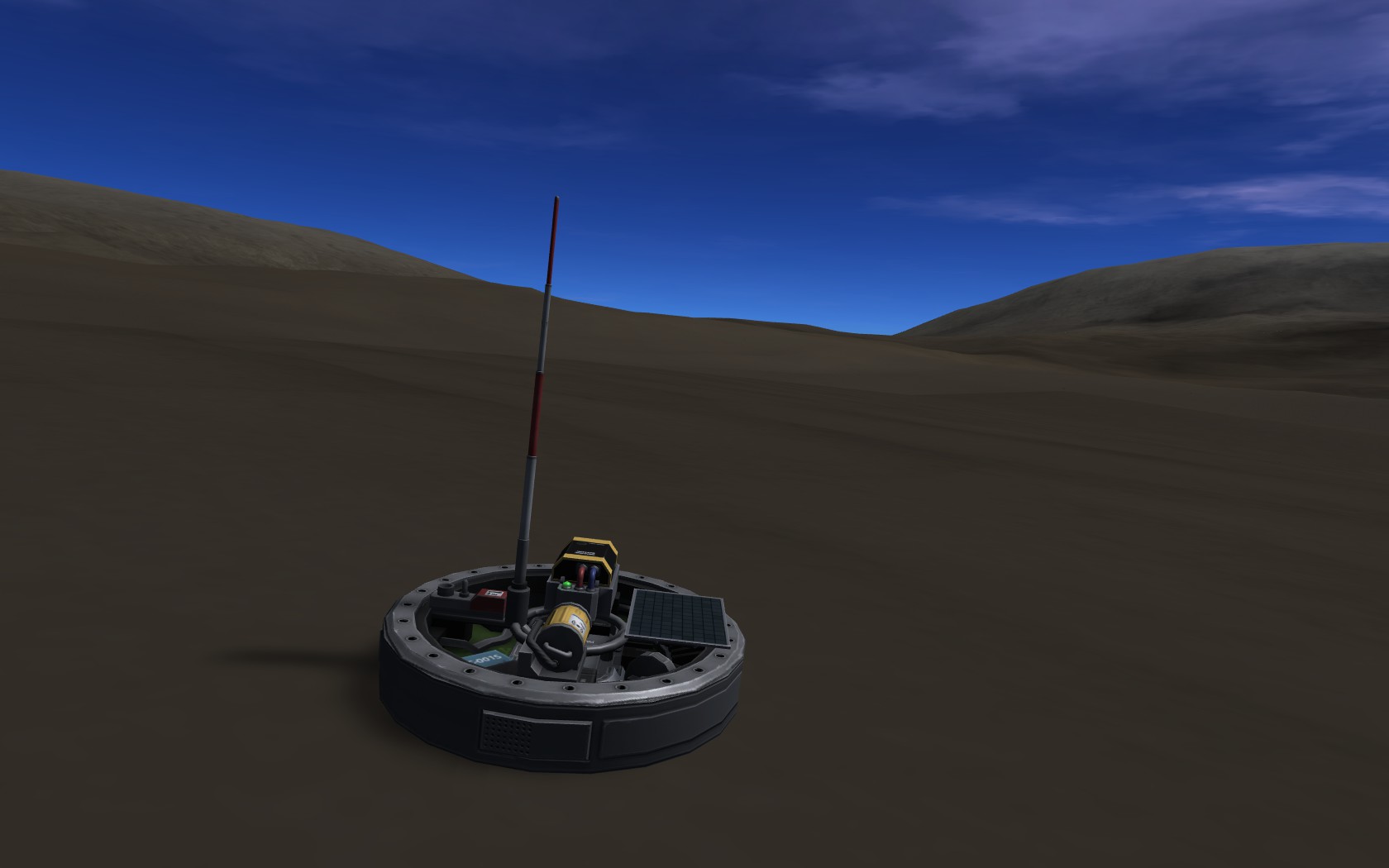 Designed as the first element to explore Layhte, it was used to test and confirm the viability of landing on Laythe using parachutes as well and study the composition of its atmosphere. No heat shielding but it should still survive reentry. Not really designed to survive impact and although it can it won’t last long on the surface. Like the other probes it is unpowered and requires the Discovery to deorbit it. 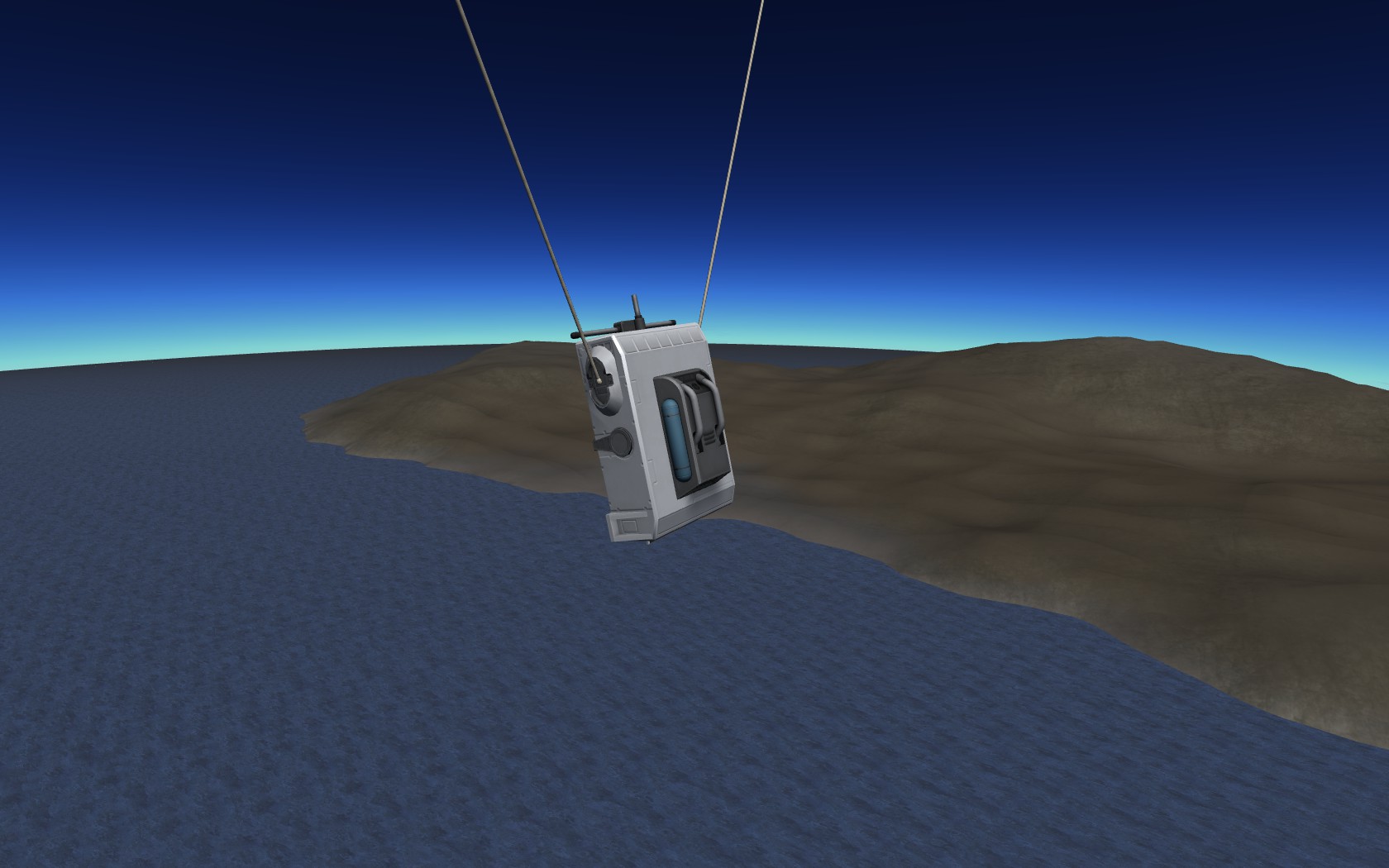 The vehicle was deigned with a specific flight plan in mind. First you use the breaking tanks to enter an elliptical Jool orbit and than from there perform some flybys, deploy an orbital probe or two, and get to a Laythe. I set up a parking orbit between Jool and Laythe to deploy a orbital probe to study Jool. Than enter Layhte orbit. First deploy the atmospheric probe and send the rest to scout a landing site for the rover. Once one is found deploy the rover. I than moved the Discovery out of the Laythe polar orbit to perform a few flybys before deorbiting it into Jool.

The idea for this craft was the simple thought what if NASA had an infinite budget for a Jupiter mission. I had also not explored Jool in this save and didn’t feel like sending multiple probes because I’m lazy. Overall it works pretty damn well and will get the job done. It has plenty of margin once at Jool but for the transfer I only had 10 m/s left so you definitely need an efficient transfer window. Originally I was gonna upload something else this weekend but had the last minute idea for this and did the build and mission in record time.

A stock rocket called 10-in-1 Laythe Probe (Discovery Spacecraft). Built with 264 of the finest parts, its root part is LiquidEngineRE-I2.