Or find other craft;
- made by RandomAppleGaming
- that are also pure stock
- that have a similar part count 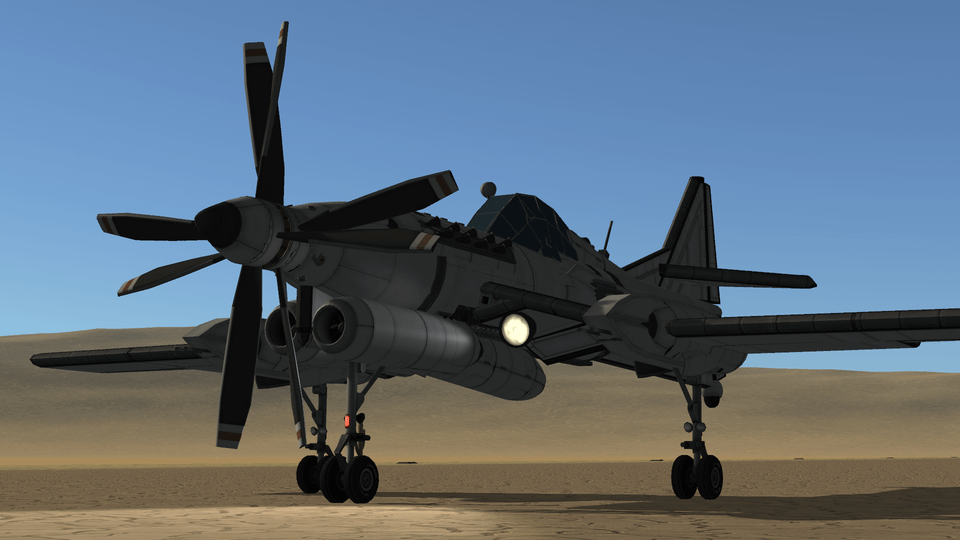 NOTE– USE ACTION GROUP 1 TO TOGGLE PROPELLER PITCH ABOVE 120M/S, THIS IS IMPORTANT TO PERFORMANCE

The DS-20x ‘Renner’ was a Long ranged, single-engined, single-seat fighter designed by Dargun-Saarfield in cooperation with Kakuzo Aircraft Corporation Designers. Designed around the large CR-12 Bomber Engine that was being developed at the time, the Renner was an experiment, three prototype aircraft were made in 1944 and first flew the next year.

The engine performance of the CR-12 would’ve given the Renner an edge over most of the aircraft of the time in speed, acceleration, and climb rate above 3500m. But the development was stifled when two of the three prototypes crashed following teething problems with the aircraft’s stability. Finally, in 1944, production began of the DS-201 Renner, and in 1945 aircraft were distributed to squadrons.

Outclassing the K-49 Stallion, the Renner was superior in speed and acceleration, however, It often slouched in a dogfight and all advantages were lost at low altitudes where the bomber engine– designed for high-flying bombers– would not produce adequate power.
Inexperienced pilots or pilots transitioning from the DS-10/21, would lose their speed and make easy prey to the K-49’s. With the added addition that they were slow to frontline service, only a total of 1000 aircraft in the first year meant that they were an extremely rare sight.

The advantage wouldn’t be kept for long, later in 1945 the Super Stallion made its appearance. Being powered by a motorjet it easily outclassed the Renner and emergency plans were put in place to produce a variant of the Renner with a motorjet.

When the call was put out for a motorjet, they found the answer in an experimental version of the DP-15 Marauder. The highly effective aircraft had a variant that included a motorjet system. With several prototypes, tests and failures, they finally had a design that allowed them to easily modify current DS-201 Renners with a motorjet system, giving it the designation DS-202 Renner and putting it into mass production in 1948.

The DS-202 ‘Renner’ would now be on equal footing with the Super Stallion, being significantly faster, having a better climb rate and a better roll rate. While the Super Stallion had the advantage in maneuverability and turn rate. The Renner still lacked in low-altitude performance, and Super Stallion’s exploited this by strafing airfields and shooting down Renner’s that were landing or climbing out.

The 202 Renner would stay in service even after The Great War and into the Cold War, albeit with several motorjet and engine improvements, newer aircraft would come and replace it and it was relegated to a heavy attacker, upgraded with TV guided bombs and a small radar.