Or find other craft;
- made by Presidential_Goat
- that are also pure stock
- that have a similar part count
Hangars that contain this craft
Stock Military 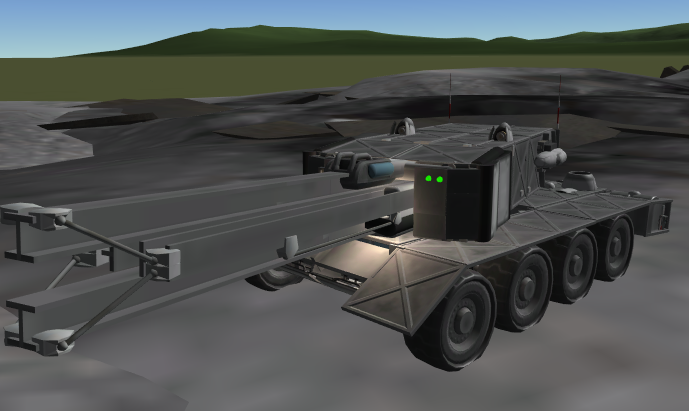 Balistic tests showed that the projectiles can penetrate 3 1x1 plates, each spaced 1 meters apart, causing significant module damage [Both the RC-L01 Remote Guidance Unit and the Small holding tank clipped inside of eachother behind the plating were both destroyed].

To enable the vehicle, press 1, then enable stage one.
Switch to the hull and press 1.

Double click the turret
Press the 3 key
Activate anti-target
Switch to the turret
Decouple
Press the G key and wait untill the landing gears at the rear are deployed
Press 1, wait 7 secconds
Press 1 again
Press the G key and wait untill the landing gears at the rear are retracted
Switch to the gun
Press the X key, increase throttle untill the arrow seaches the first mark
Quickly press the R key
Follow the firing sequence
…
The war was lost inside of the soldier’s eyes; the mechanized units were no match against the enemy armour; the time it took for them to deploy was too much for halting the enemy, which was walking across the battlefield. The soldiers were forced to make bold moves in order to distract the enemy in order to fulfill the deployment time. Even though the war was fought at the borders, the effect of it was felt back home; the entire country was forced to work for the wartime effort. Even though the tension back home was noticeable, the stress at the production factories was even higher. But the workers, the civilians nor the soldiers gave up. After all, losing a war is the worst thing that could happen to a country.
.
As the commanders were desperate to hold the enemy forces, reports came in of arriving friendly reinforcements. Not just barely equipped foot soldiers; several squads of MBT’s were arriving the battlefield.
.
The blazing tank guns, the infantry hiding behind them, having MBT’s that are halting the enemy forces whilst the long-range mechanized units picked off the enemy and an air force to repel enemy aircraft attacks made the country stand stronger than ever before against the enemy.

President Goat for 2020
Altough goats don’t live for that long.