try not to crash it
Note: this was made in KSP v1.3.1 - It may not function as intended in KSP 1.9.1
This craft has been added to your downloads queue. Use the KX Mod to fetch it when you are next in KSP. Enable deferred downloads to make this the default way to download.
Download craft with the KerbalX Mod
how to install
re-download

Or find other craft;
- made by OHara
- that are also pure stock
- that have a similar part count 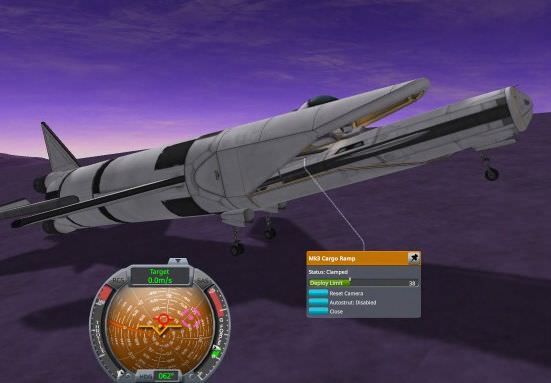 This two-stage vessel has one purpose: repeatedly shuttle crew between Eve’s high peaks and an orbital station.
It is not easy.

Takeoff from 7500 meters above sea level, hold AoA around 3° to gradually transition to vertical. Outside the atmosphere, open the cargo bay (AG9) and decouple the orbiter (AG2). Start the orbiter engines (AG3) at least 1 minute before apoapsis, to reach orbital velocity before the lifter falls into the atmosphere.

Glide the lifter back to landing at the departure point.

The orbiter will reach orbit but likely need help from an orbital tug to reach any space station.
Glide the orbiter back to the departure point.

For re-docking, both craft point slightly uphill, the orbiter rolls into the cargo ramp, and then the lifter gulps it down, like a pelican swallowing a fish. After docking, the cargo ramp can close around the orbiter.

A stock aircraft called Eve peak-to-orbit shuttle. Built with 51 of the finest parts in the SPH in KSP version 1.3.1.