try not to crash it
Note: this was made in KSP v1.1.2 - It may not function as intended in KSP 1.10.1
download ckan meta-file
This craft has been added to your downloads queue. Use the KX Mod to fetch it when you are next in KSP. Enable deferred downloads to make this the default way to download.
Download craft with the KerbalX Mod
how to install
re-download

Or find other craft;
- made by Mycroft_33
- that use the same mods | that are compatable | with similar mods
- that have a similar part count
Hangars that contain this craft
=== SUBMIT CRAFT (Guard13007's Plane Reviews) === | Get ready for war! | Kerbin Military | Coalonia Military Aerospace Unlimited Inc. (CMAU) 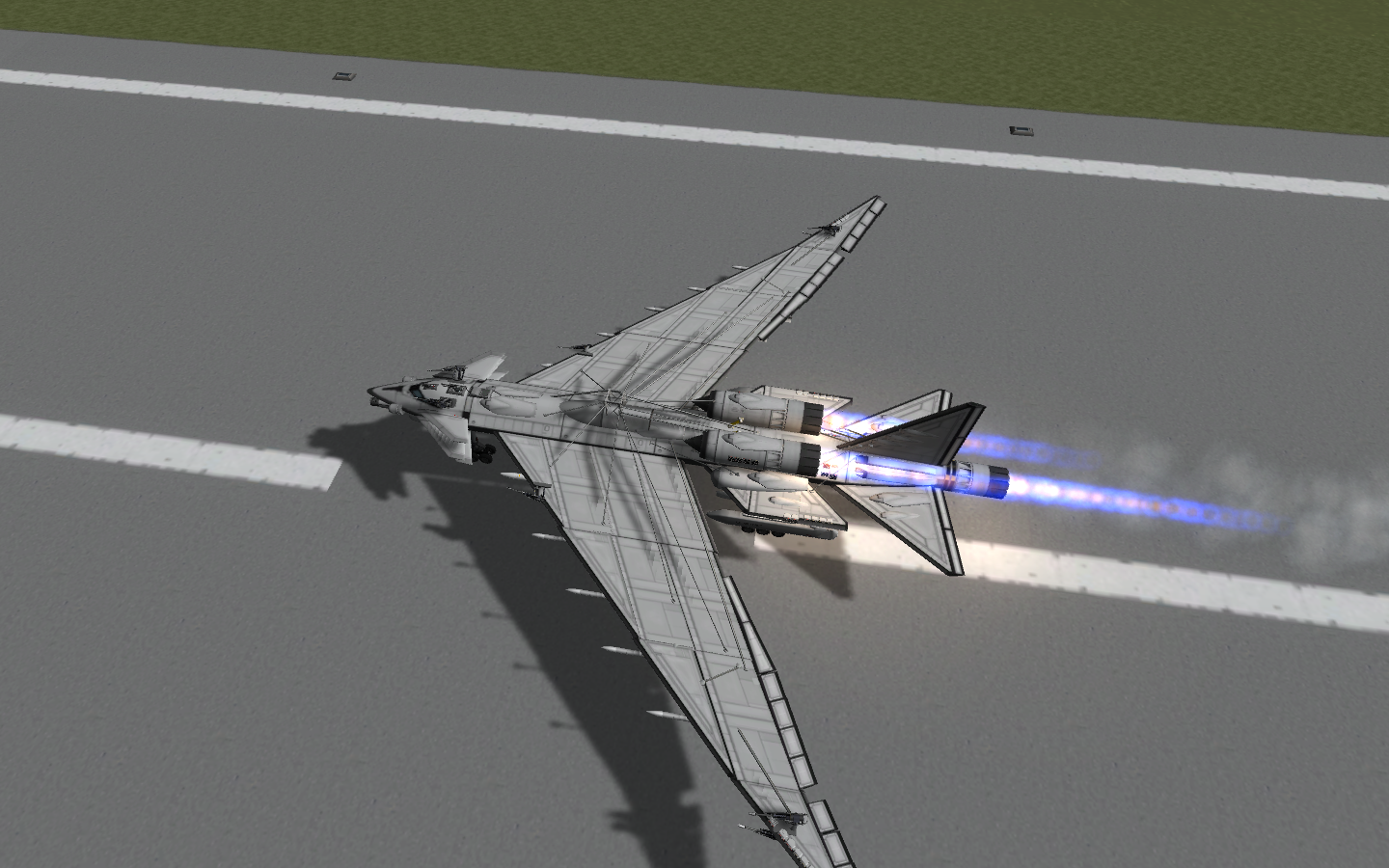 A mod aircraft called the B3-A. Built with 258 of the finest parts, its root part is mk2Cockpit.Standard.

The B-3A is CMAU’s newer, popular redesign of the little known B3. Strangely, this mid-size bomber holds no actual bombs, due to a dispute with the bomb manufacturer. This has led many to question why it is classified as a bomber, but CMAU has alleviated complaints with promises of a second redesign, to be called the B-3B. They hope to launch it as soon as the dispute can be resolved. Meanwhile, the B-3A features 10 heat-seeking AIM-9 Sidewinder missiles, 8 radar guided AIM-120 AMRAAM missiles, 2 anti-radar AGM-88 HARM missiles, 2 GPS-guided AGM-86C cruise missiles, 6 M230 chain gun turrets, twin frontal GAU 8 30MM cannons, and one Airborne Laser. CMAU says that what it lacks in bombs, it makes up in missiles and guns. Unfortunately, aerodynamic testing has revealed that if the pilot pulls up to sharply, the plane can disintegrate mid-air. Despite this, so far the design has proven reasonably popular. 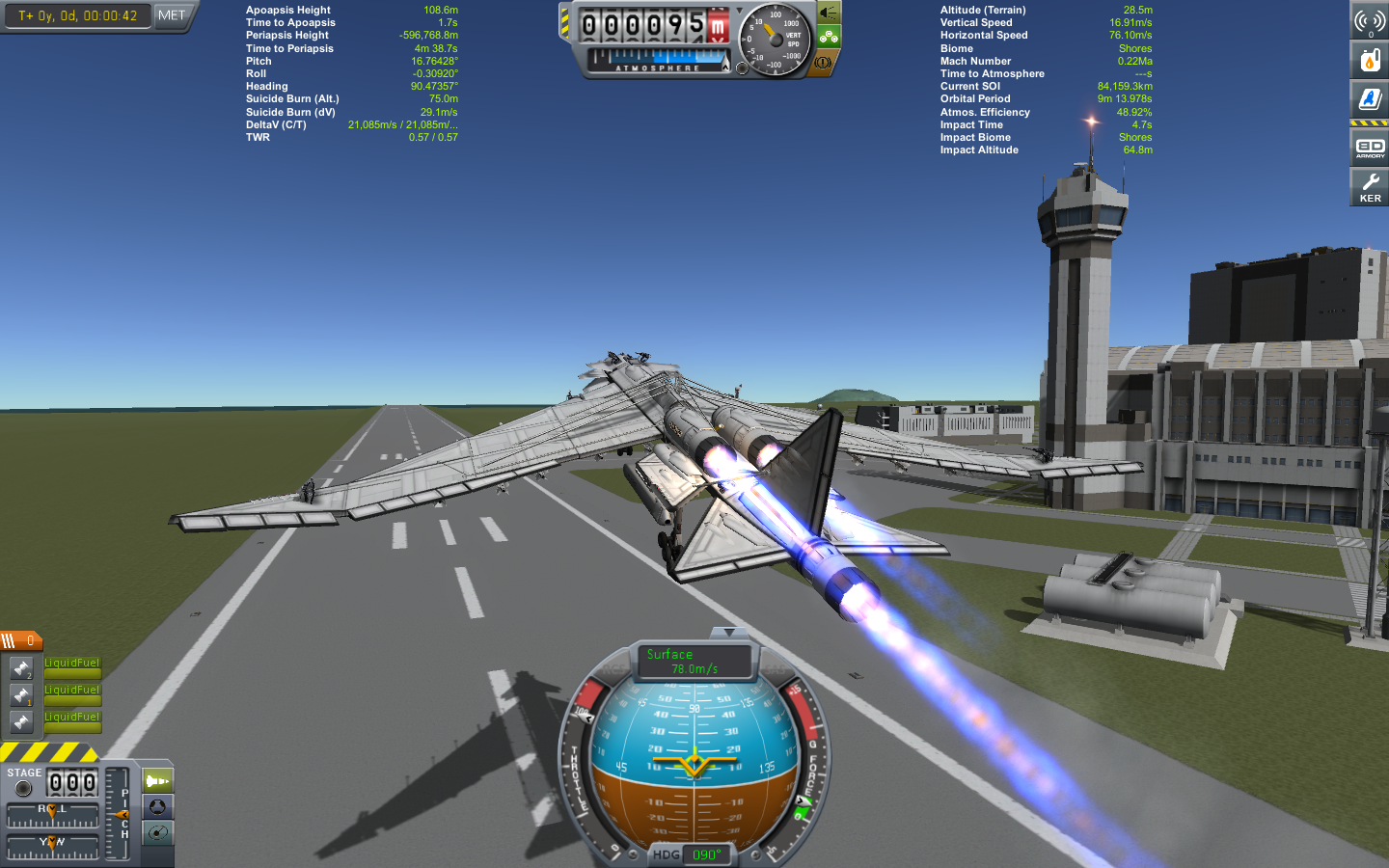 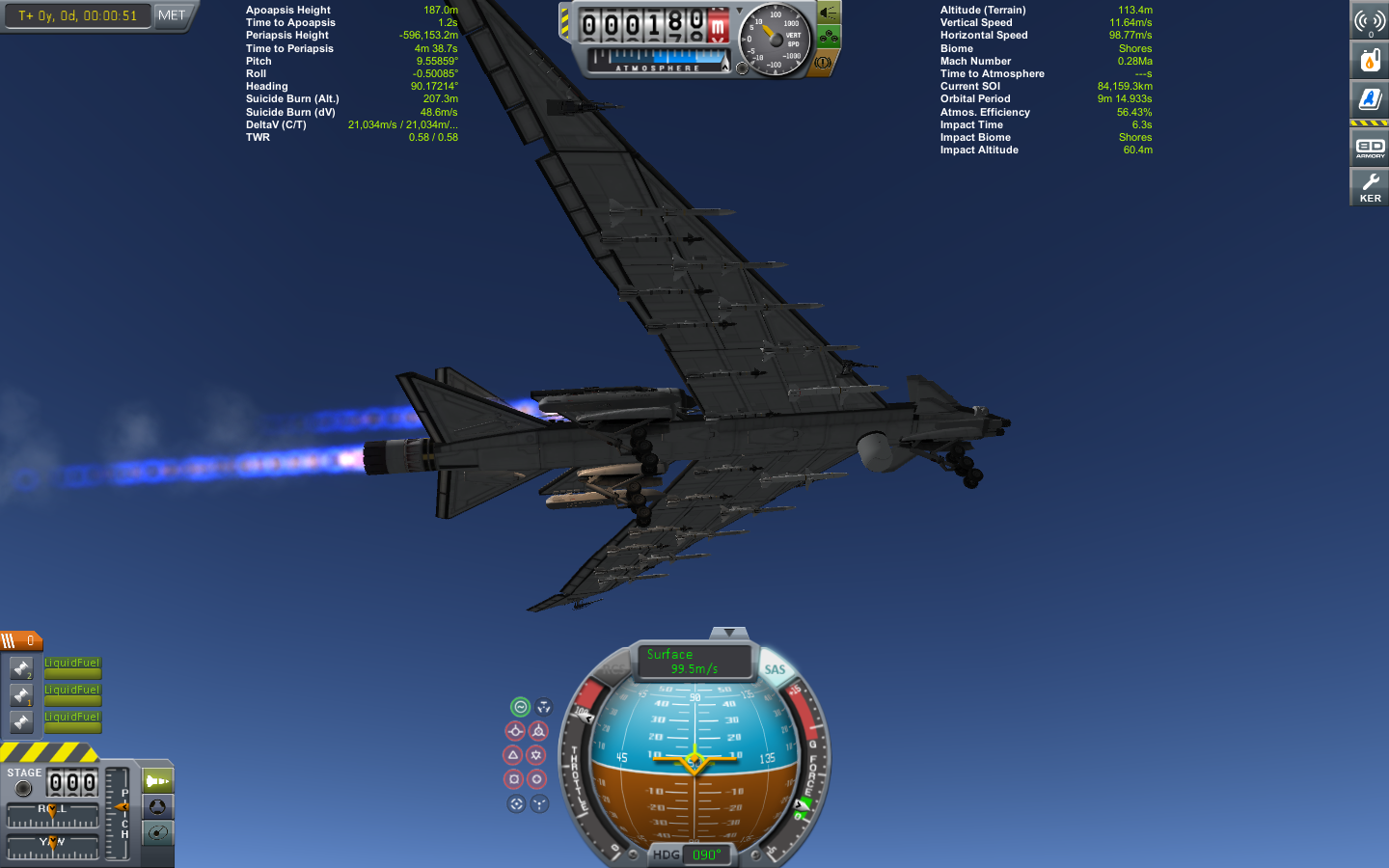 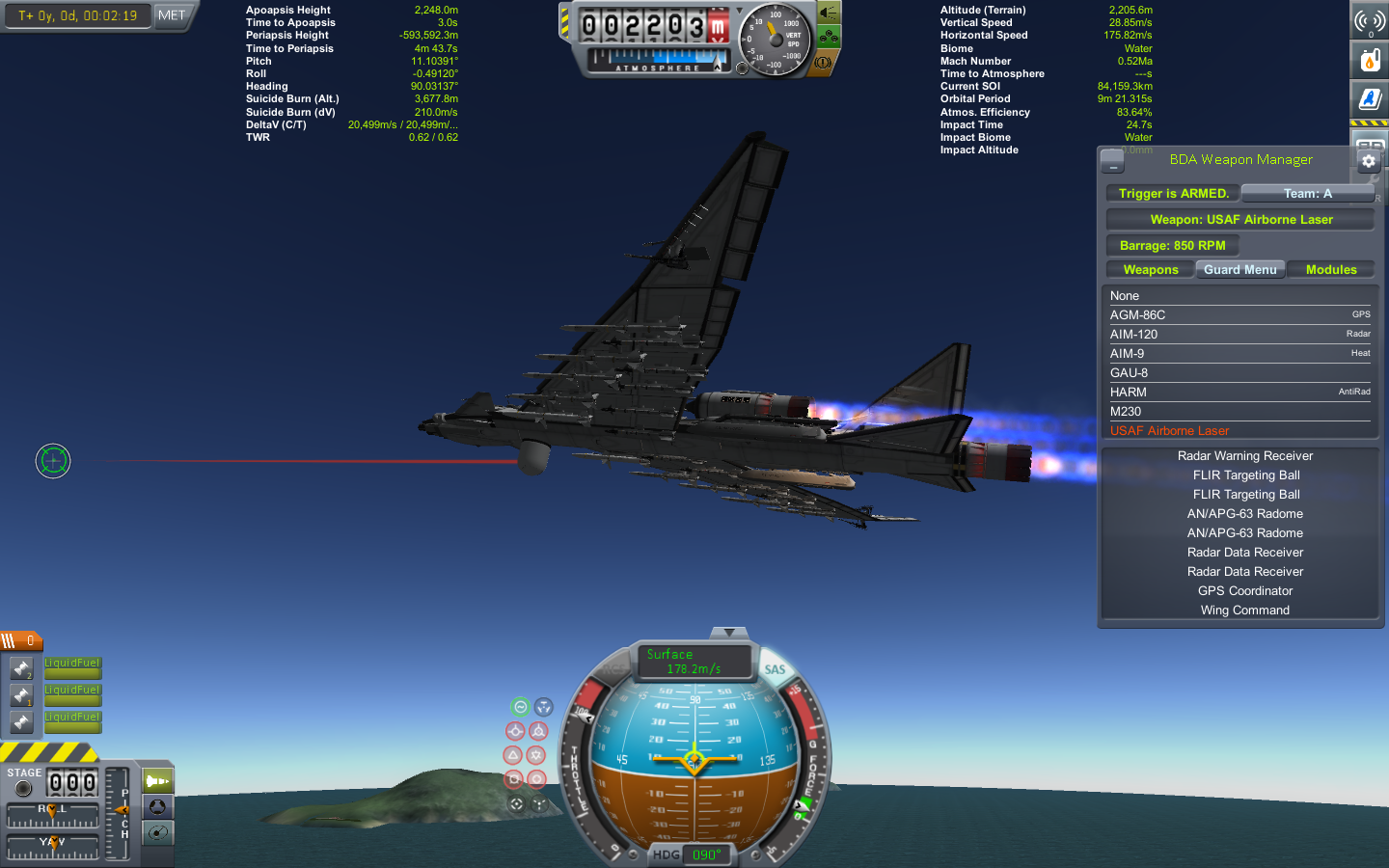 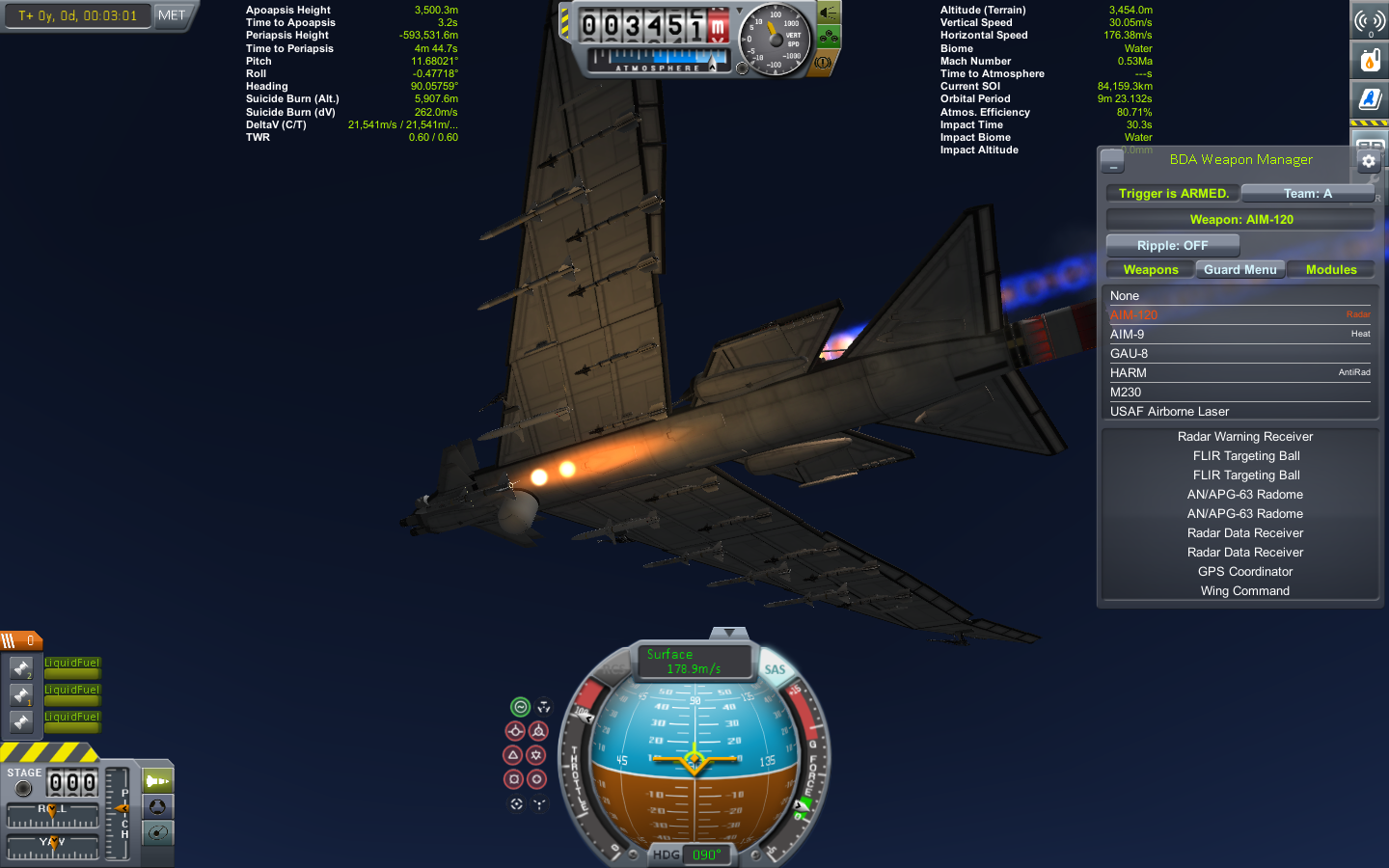