Or find other craft;
- made by Jestersage
- that are also pure stock
- that have a similar part count 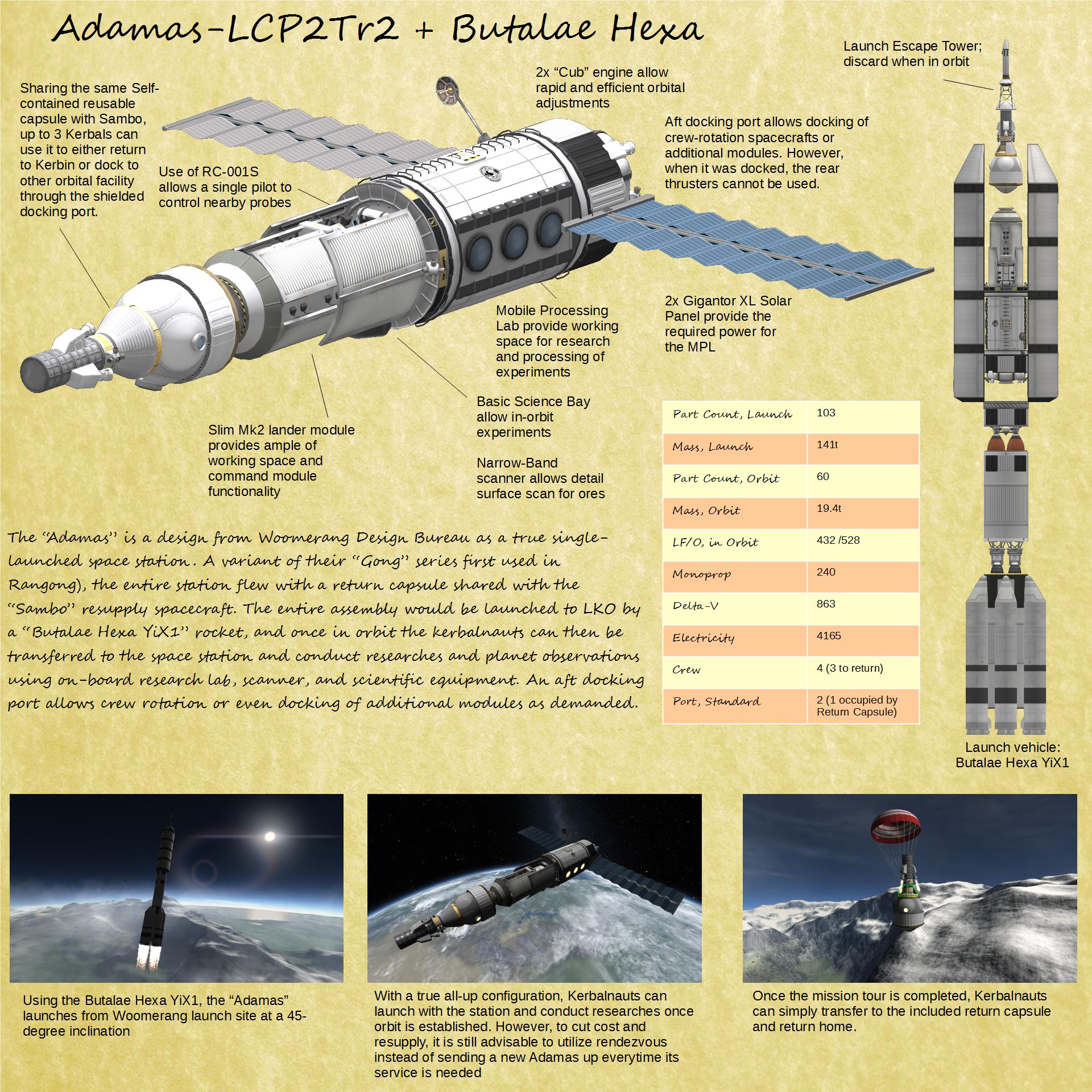 The “Adamas” is a design from Woomerang Design Bureau as a true single-launched space station. A variant of their “Gong” series first used in Rangong, the entire station flew with a return capsule shared with the “Sambo” resupply spacecraft. The entire assembly would be launched to LKO by a “Butalae Hexa YiX1” rocket, and once in orbit the kerbalnauts can then be transferred to the space station and conduct researches and planet observations using on-board research lab, scanner, and scientific equipment. An aft docking port allows crew rotation or even docking of additional modules as demanded.

As with many Russian military related stuff, there are plenty of bits missing, so it is hard to say whether the idea of a military space station comes first, or that of a civilian space station. What is certain is that the work on Almaz started before N1 or even the announcement of USAS’ MOL. Possibly due to the fact that docking is not perfectly achieved at that time, the Almaz in its original form, the APOS, is also equipped with a return capsule ala the MOL. (This is what this craft represent)

The failure of N1, the success of Apollo landing, and USAS’s MOL annoucement allows more resource be placed on Almaz – or more properly speaking, using Almaz to spring board a space station program. In order to ensure a Soviet space station is in orbit before that of American’s, the OKB-1 took Soyuz’s subsystem and placed them inside an Almaz hull, and thus the Salyut 1 is born. Meanwhile, work on Almaz continued. What actually flew, however, is just the Almaz without the VA capsule, as Salyut 2, 3, and 5, with the crew arrived afterwards in Soyuz.

In the end, just like the American counterpart, the Soviet also realize it is better to have an automated reconnaissance platform, thus Almaz as a military space station was scrapped. Its support craft, TKS and VA, had never carried a crew up or down. Nonetheless, the construction method of Almaz has its legacy with the docking-tunnel within the service module as used for Salyut 6/7, Mir, and ISS-Russian section.

Please Upvote Crafts – that will be greatly helpful!

If you like what you downloaded, feel free to comment in my craft catalog thread on the KSP Forums - Jestersage