try not to crash it
Note: this was made in KSP v1.11.0 - It may not function as intended in KSP 1.12.5
This craft has been added to your downloads queue. Use the KX Mod to fetch it when you are next in KSP. Enable deferred downloads to make this the default way to download.
Download craft with the KerbalX Mod
how to install
re-download

Or find other craft;
- made by Jestersage
- that are also pure stock
- that have a similar part count 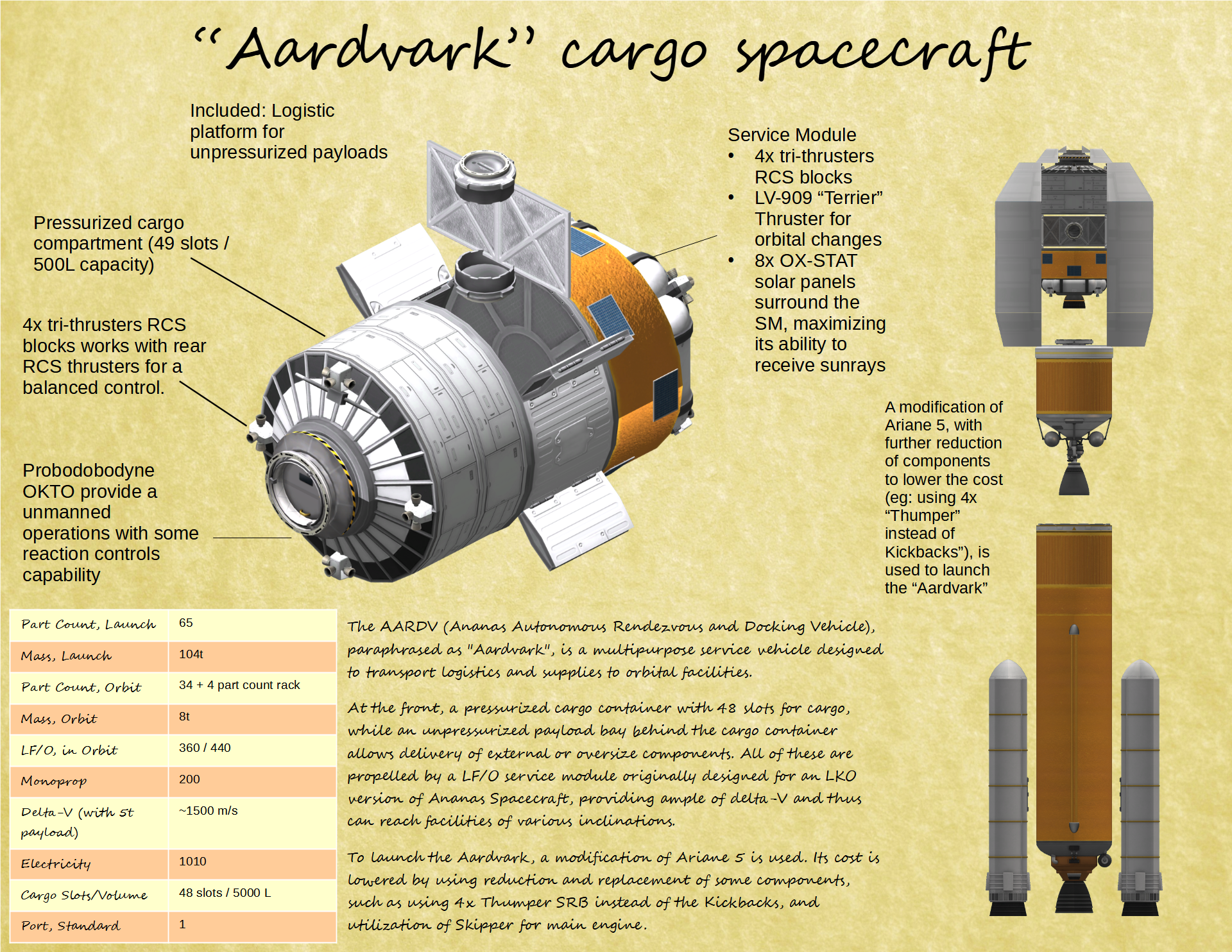 The AARDV (Ananas Autonomous Rendezvous and Docking Vehicle), paraphrased as Aardvark, is a multipurpose service vehicle designed to transport logistics and supplies to orbital facilities.

At the front, a pressurized cargo container with 48 slots for cargo, while an unpressurized payload bay behind the cargo container allows delivery of external or oversize components. All of these are propelled by a LF/O service module originally designed for an LKO version of Ananas Spacecraft, providing ample of delta-V and thus can reach facilities of various inclinations.

To launch the Aardvark, a modification of Ariane 5 is used. Its cost is lowered by using reduction and replacement of some components, such as using 4x Thumper SRB instead of the Kickbacks, and utilization of Skipper for main engine.

This spacecraft is a combination of what I consider to be the best feature of IRL’s HTV of Japan, and AARDV of the alternative history of Eyes Turned Skyward. However, it differs form both Aardvark of ETS and IRL’s HTV in the following:

Otherwise, they both function similarly, being used to supply the ISS (or its ETS equivalent, known as Freedom), and have unpressurized payload bay in the center for external equipment.

The Launch Vehicle is one of my many attempts to make a good-enough replica LV that is powerful, cost effective, and doesn’t need to use the DLCs. As indicated, I started with the stock Ariane 5 and attempt to make a spec-matched Ariane 6. The end result failed as intended, but sufficient to function as H-IIa.

Please Upvote Crafts – that will be greatly helpful!

If you like what you downloaded, feel free to comment in my craft catalog thread on the KSP Forums - Jestersage