Or find other craft;
- made by HolidayTheLeek
- that are also pure stock
- that have a similar part count
Hangars that contain this craft
Download Queue | Minute to Midnight | good stuff | Insanely awesome stuff 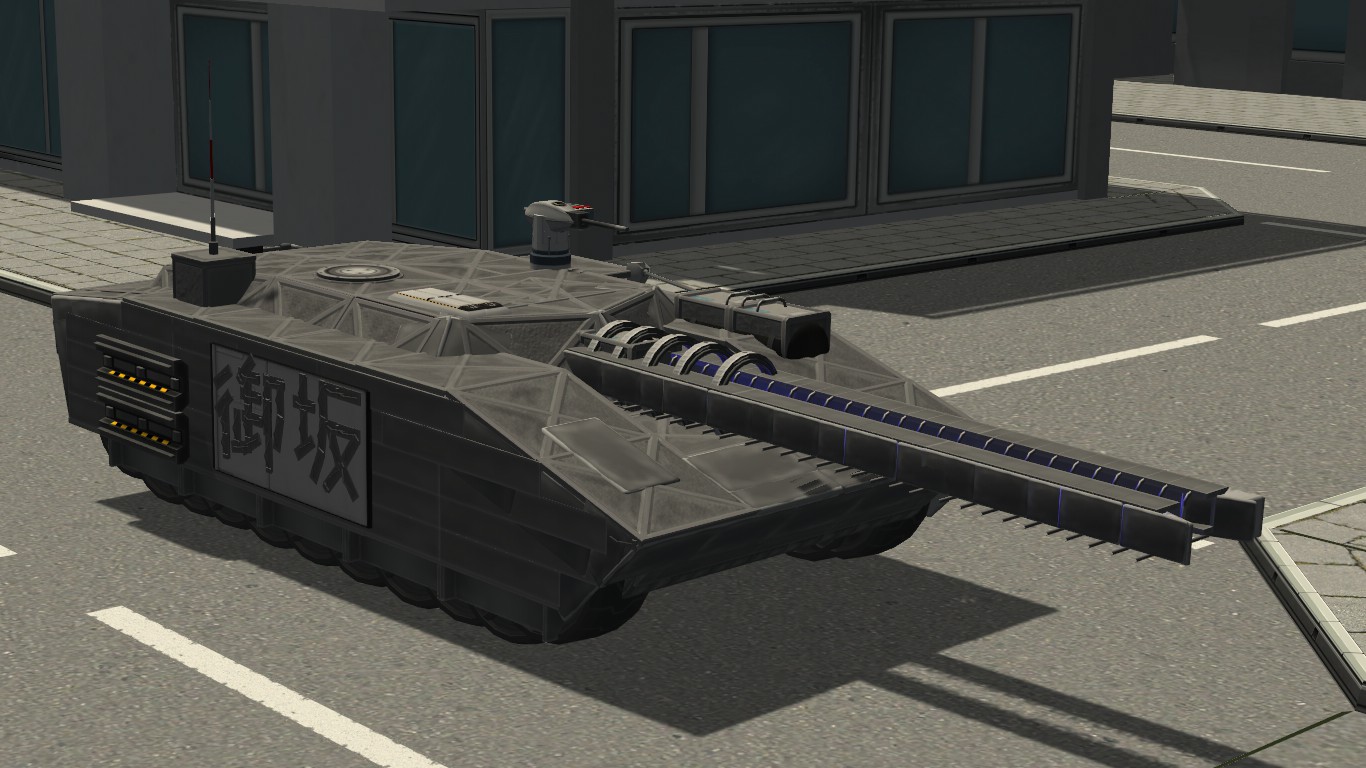 With Japan’s Navy adopting Railgun-armed ships to counter similarly armed Chinese ships in the early 2040s, the idea of fitting a railgun in a tank arose. This would later become the Type 77 ‘Misaka’, which, was named after the small town in the Yamanashi Prefecture. The tank, sharing same the type of weapon, shared the name with the ship class in Japan’s Navy.
.
As far back as mid 1997, the Russian Airforce experimented with fitting a railgun on an aircraft with the Ykil-3 XF project. The gun utilized energy generated from the engine turbines to power an onboard railgun. The gun was scaled down both in size and energy consumption to fit on a plane. The coin-sized projectile fired from the weapon would reach a speed of only 1030m/s (not much faster than the plane) and was largely ineffective. With the project being too ahead of it’s time, it was cancelled.
.
Kuriya Industries, who had just developed the railgun tech for the Misaka Class, began experimenting with smaller scale railguns for use in tanks during the late 2050s and early 60s. The new railguns used a high-rpm turboshaft to generate enough energy to fire a projectile at speeds of about mach 6. By 2068, the prototype railguns were both small enough and powerful enough to fit in a tank. To fit the gun inside, the tank sacrificed a turret and instead opted for a casemate mount. The tank was lightly armoured as it was not expected to fight close-quarters and instead snipe targets from several kilometers away. The ballistics of the gun were better than any conventional cannon in service. The tank entered service in 2077 giving it the ‘Type 77’ designation.
.
The Misaka would first see combat during the Second Korean War in 2097. Throughout the war, the type would see mixed success. During the Battle of Pyongyang in 2099, Misaka Tanks would conduct a surprise attack on a formation of Holidian Guardian IIs and North Korean T-14s. Misakas destroyed several Holidian and North Korean vehicles before entering their effective combat ranges. The Type 77 saw great success disabling enemy tanks from a distance or causing large amounts of damage with indirect fire. Weak armour and a lack of a turret made it vulnerable to CAS (this was greatly applied by the Holidian Air Force) or close-range engagements with more than one tank.
.
With the Korean Treaty in 2103, the Misaka would retire as countries worldwide began to de-militarize. The railgun tech from Kuriya was evaluated and helped develop the ‘Mass Accelerator’ electromagnetic cannon.This massive, 500m long cannon launched small payloads into space from the vast, empty, South Australian desert.