try not to crash it
Note: this was made in KSP v1.12.2 - It may not function as intended in KSP 1.12.4
This craft has been added to your downloads queue. Use the KX Mod to fetch it when you are next in KSP. Enable deferred downloads to make this the default way to download.
Download craft with the KerbalX Mod
how to install
re-download 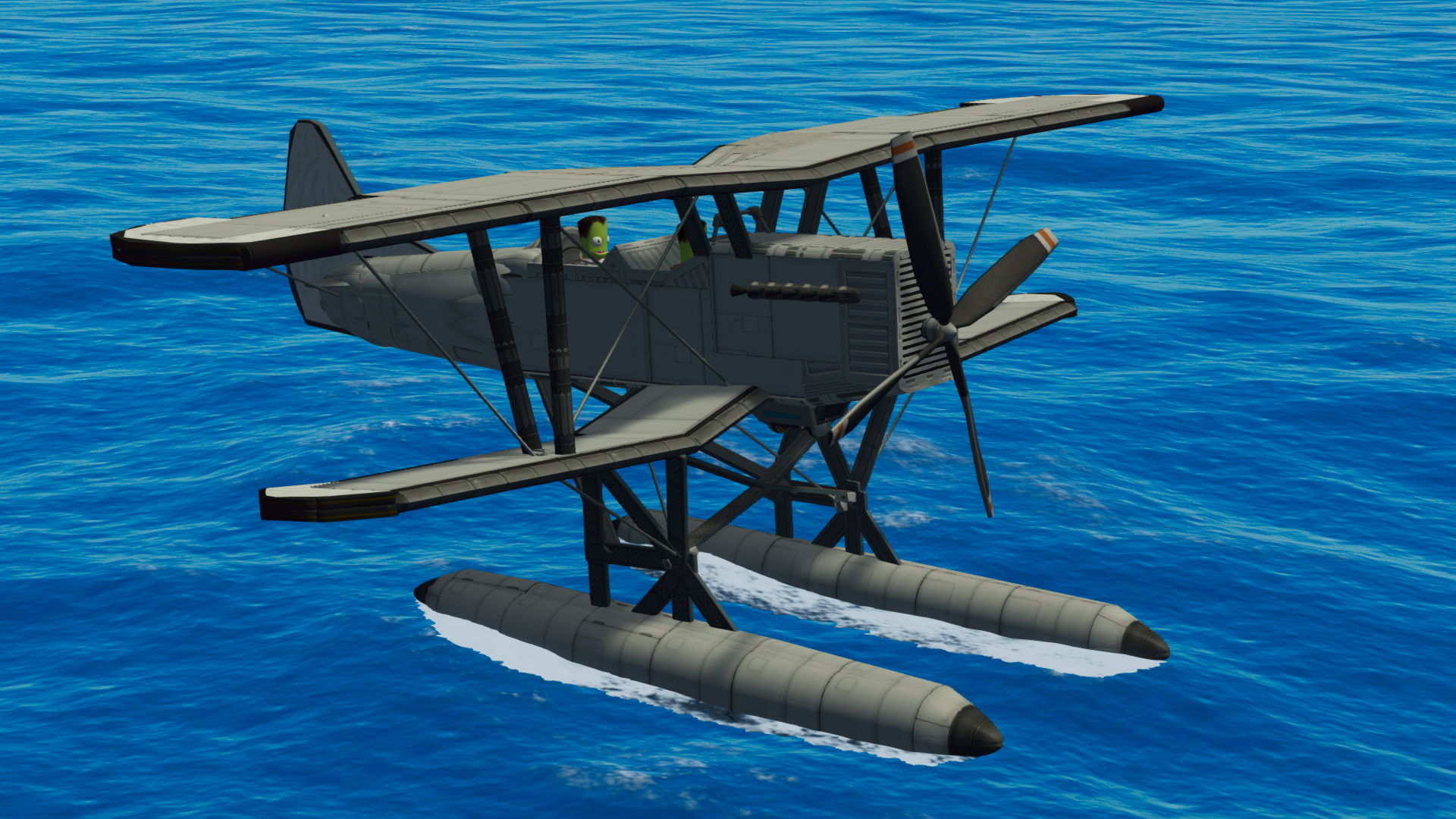 The S4-N Sea Spotter was a general purpose floatplane designed and built by the Arcan Aeroplane Firm (AAF). The aircraft first flew in early 878 with the aircraft entering widespread service with the Troscan Navy during mid-879. A landplane equivalent was developed alongside the S4-N and became the standard training, reconnaissance and light bombing aircraft for the Troscan Military.
.
During the mid-870s, the Troscan Kingdom experienced all the benefits of the Industrial Revolution in full swing. With greater production capacity, the Kingdom no longer needed to rely on trade or the occupancies of foreign powers within its borders to prosper and started an Isolationist Period from 875 - 889. However, the expulsion of foreign powers had left the Troscan Empire with shortages of Oil and Natural gas, prompting the Troscan Navy to conduct undersea surveys for potential sites to extract these resources. On one undersea expedition, remnants of the long-lost Tyran Empire were discovered and the numerous ancient artifacts found were reverse engineered, giving the Troscan Kingdom the secrets to flight and mechanized warfare. With the secrets to flight unlocked and several pioneers already flying, in 879, the Troscan Military and Navy requested a standard aircraft for reconnaissance purposes. Four aircraft were evaluated each designated with the letter S (for spotter) and a number from 1-4. The winning aircraft, the S4 Spotter and S4-N Sea Spotter came from the Arcan Whaling Firm (Now Arcan Aeroplane Firm).
.
Both the S4 and S4-N saw service during the invasion of Eslan in 889. Uncontested control of the skies, mechanized troops and steam-powered battleships crushed the opposing sail-powered warships and musket-armed cavalry of the Eslan Forces. Such overwhelming technological superiority over any other power lead to technological stagnation within the Kingdom, keeping the S4 and S4-N in frontline service for decades, despite being long overdue for replacement due to advancements in aviation technology.
.
However, by the Continental War of 933, other nations had begun capturing S4s for themselves and reverse engineering them to develop their own aircraft. S4s were no longer the only aircraft flying and became increasingly vulnerable to enemy attacks. It became clear that a single, decades-old design was no longer capable of providing the needs of a modern military. S4 and S4-N aircraft were retired from frontline service in 935, relegated to training purposes until 937 when it was finally retired after nearly sixty years of service. Newer, more specialized pursuit, bombing and spotting aircraft eventually came into service to combat the growing air power of continental forces.
.
Postwar, S4 and S4-N aircraft became popular in the civil sector, being relatively inexpensive as military or navy surplus. Despite a more than half-a-century old design, many remain flying today in lesser developed communities due to their ease of maintenance and low cost. 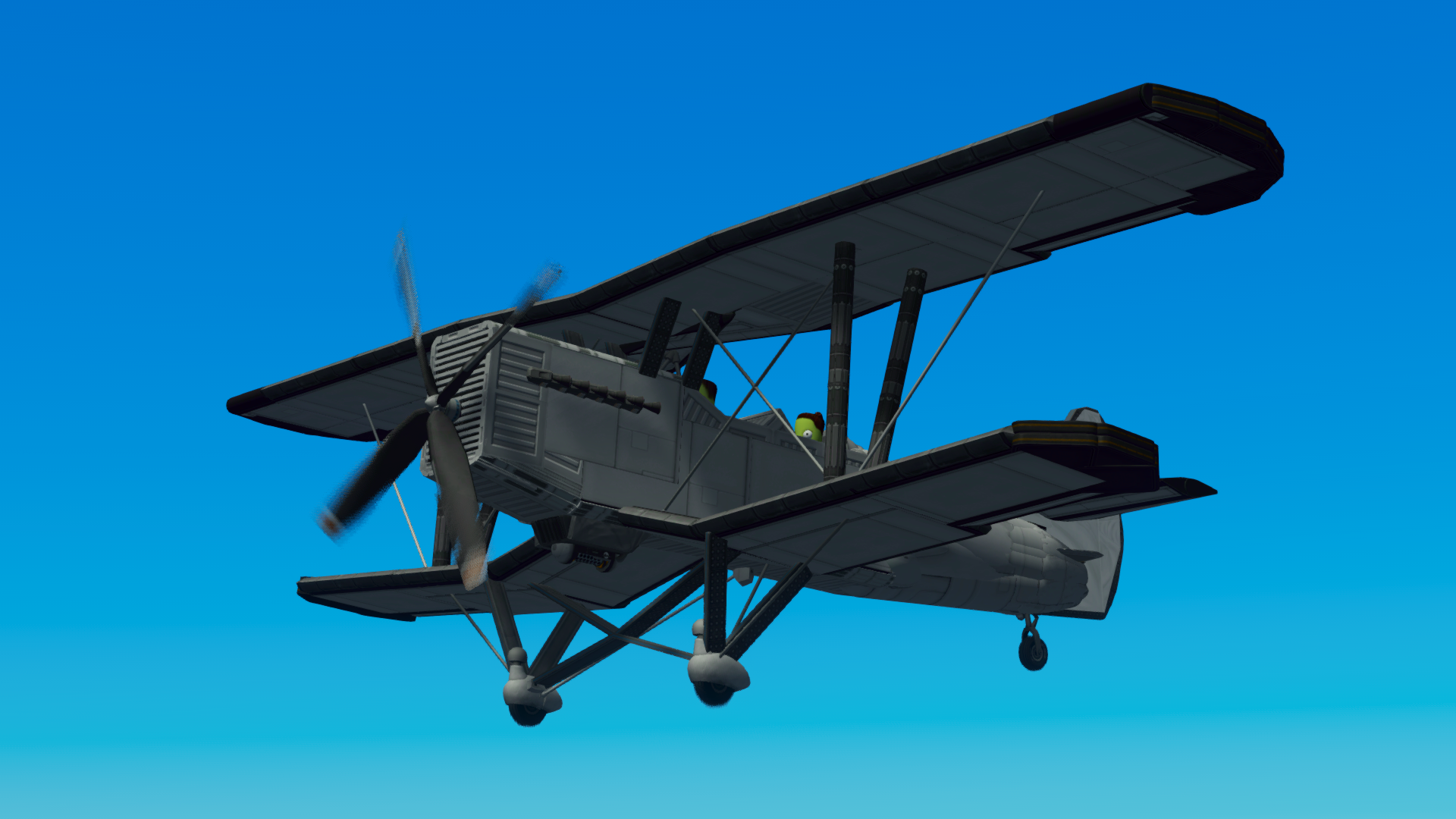 .
HOW TO TAKEOFF
.
1) Move to water (either use hack gravity, vessel mover or ingame ship teleporter)
2) Press R for takeoff/landing flaps
3) Hold down S and full throttle until the aircraft takes off
.
HOW TO LAND
.
1) Press R for takeoff/landing flaps
2) Slow down to ~16m/s
3) Land with the nose facing up, tail first to avoid flipping over. Landings should be short and abrupt as to not flip the aircraft over.