What's this slidery thing next to the download link?
When the slider is in the ON position clicking the download link will download the craft and open the download tab so show you more info
When the slider is in the OFF position clicking the download link will just open the download tab without downloading the craft
erm....why? Once you've downloaded a craft the slider will automatically move to the OFF position, so you can then open the download tab without re-downloading the craft each time. If you want to re-download the craft there will be a link in the download tab
It also acts as a visual que to remind you which craft you've already downloaded, if it's in the OFF position (red) you've already downloaded the craft. As you are not logged in it will only remember what craft you've downloaded in this session. Login if you want KerbalX to remember your downloads between sessions.
SPH
compatible
stock+DLC aircraft
#floatplane #seaplane #racer #monoplane #propeller
Craft Details
Class
Aircraft
Type
SPH
Mass
27.1t
Cost
853,891.0
No. of Stages
2
Crew Capacity
1
Part Count
795
No. of Struts
10
Root Part
structuralIBeam2
Built in KSP
1.12.2
Size
18.37 x 5.04 x 11.05
Resources
ElectricCharge
IntakeAir
LiquidFuel
SolidFuel
KSP DLCs
Making History DLC
Breaking Ground DLC
full parts list

try not to crash it
Note: this was made in KSP v1.12.2 - It may not function as intended in KSP 1.12.4
This craft has been added to your downloads queue. Use the KX Mod to fetch it when you are next in KSP. Enable deferred downloads to make this the default way to download.
Download craft with the KerbalX Mod
how to install
re-download 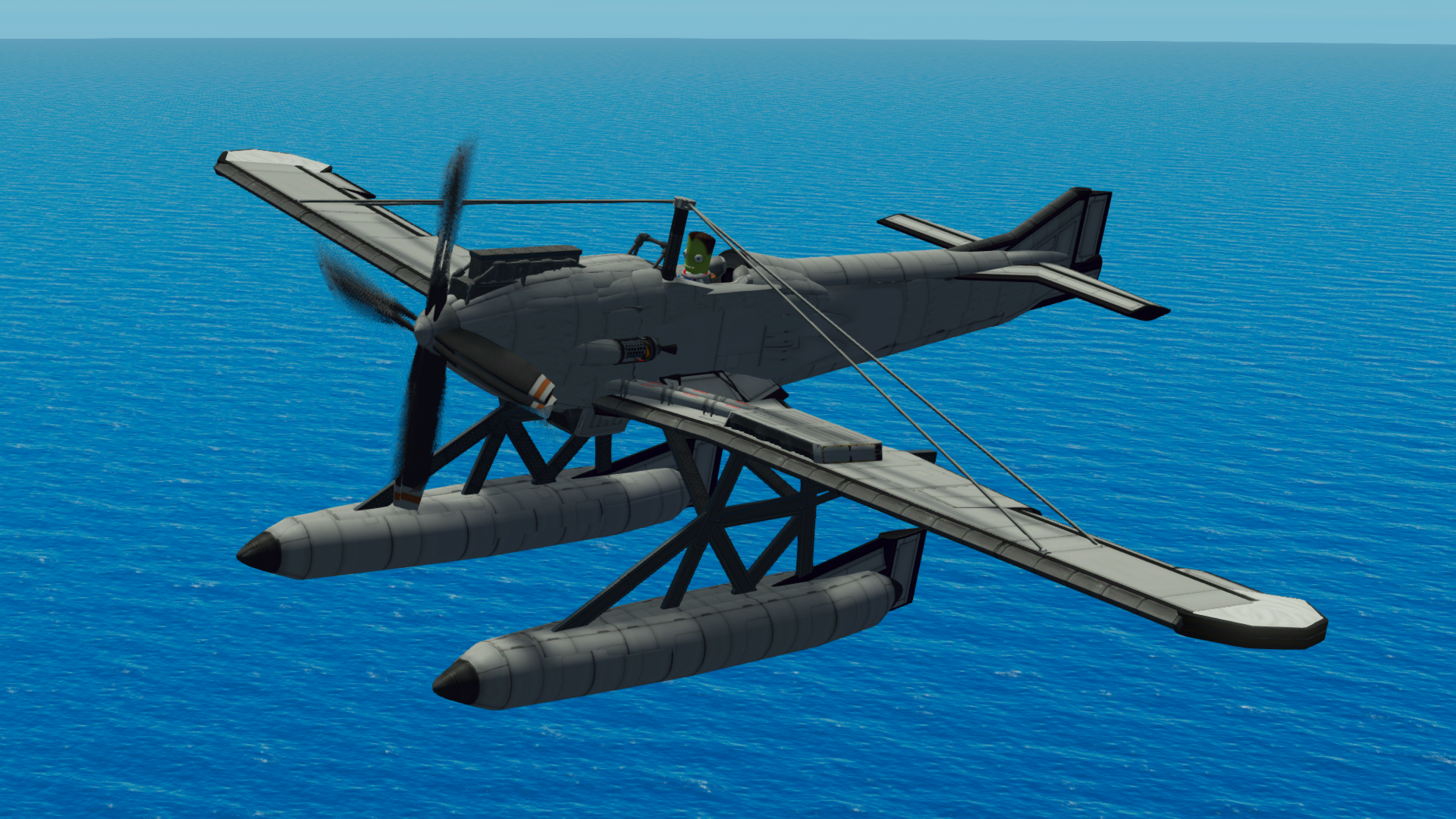 .
The RA-3 was the airspeed world record holder from the 11th June - 9th September, 881, reaching a top speed of 380km/h at the Port George Air Race - the Troscan Kingdom’s largest air race at the time.
.

.
Several ancient lost technologies from the lost Tyran Empire were uncovered by the Arcan Whaling Firm after an undersea survey for oil and natural gas in 875. Amongst these lost technologies were the secrets to flight in the form of blueprints for ancient Tyran warplanes. However, as the Arcan Whaling Firm - or even any of the Troscan Empire at the time - did not yet possess the technological prowess to completely reverse engineer the complex stressed aluminium structures of the ancient warplanes. Instead, a more familiar wood and fabric construction was used, akin to the observational kites and gliders already being produced by the company. The resultant aircraft flew the following year and was a small, fabric-covered biplane and marked the first time mankind had achieved powered flight since the fall of the Tyran Empire. Blueprints were sold to the Troscan Government who then sold copies to the highest bidder, thus fueling the early pioneer era of aviation. Several pioneers were already competing to fly the fastest and as such, in the calm waters of Port George, the first formal air race was established.
.
The RA-3 was built by pilot and engineer Reginald Archford in preparation for the the Port George Air Race of 881. The aircraft featured novel features at the time, such as an (at the time) uncommon monoplane arrangement and a wooden, semi-monocoque fuselage - both reducing drag. The wings were conventionally constructed from fabric and had external struts to support them. To provide the power the aircraft needed, a custom built six-cylinder inline which, gave the aircraft 360hp.
.
The aircraft’s record was eventually broken on the 9th of September by the Stanley IV biplane, which, remained the last biplane to hold the airspeed record.

.
1) Move to water (either use hack gravity, vessel mover or ingame ship teleporter)
2) Press R for takeoff/landing flaps
3) Hold down S and full throttle until the aircraft takes off
.

.
1) Press R for takeoff/landing flaps
2) Slow down to ~16m/s
3) Land with the nose facing up, tail first to avoid flipping over. Landings should be short and abrupt as to not flip the aircraft over.