Or find other craft;
- made by HolidayTheLeek
- that are also pure stock
- that have a similar part count
Hangars that contain this craft
good stuff 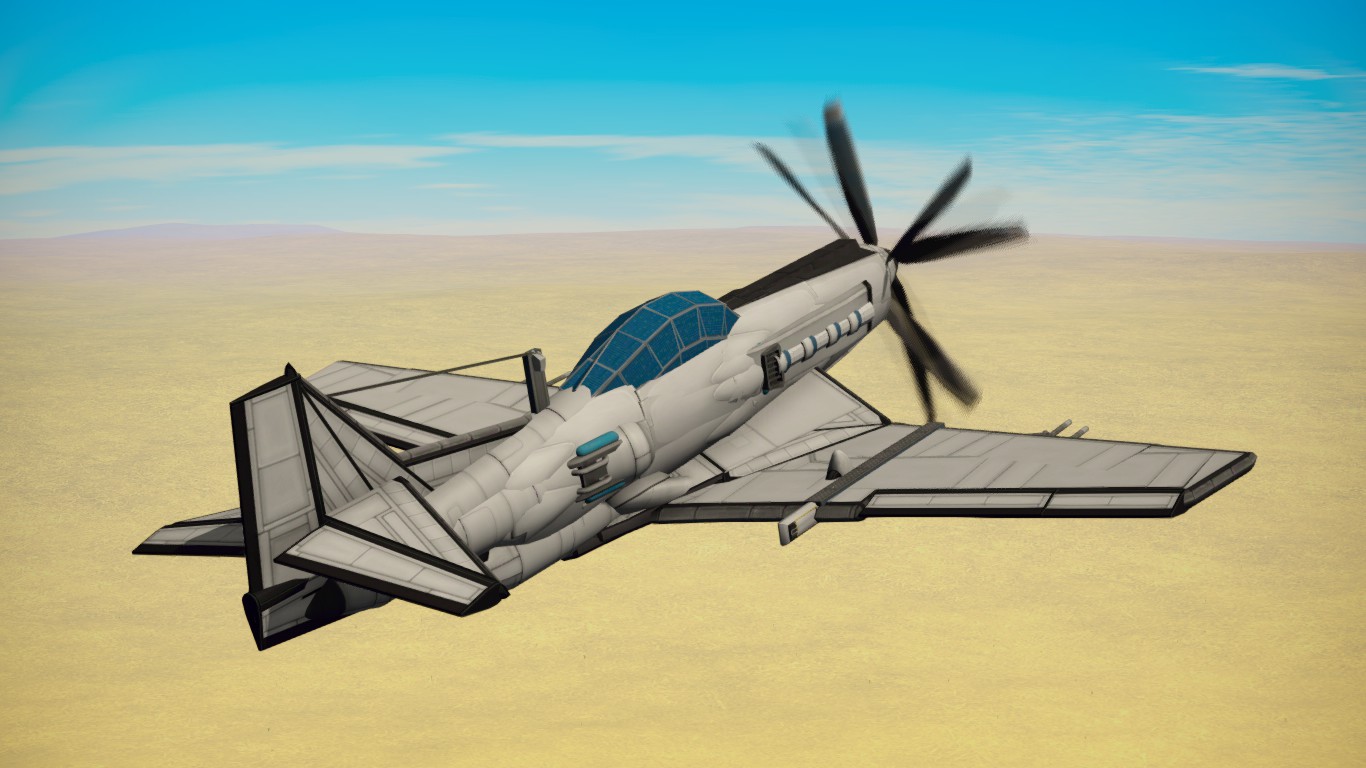 Omicron’s Super Stallion II would first begin as the unsuccessful Stallion fighter with development starting in 1940. Designed to mimic successful fighters in the Royal Isles, the aircraft utilized an inline engine unlike most Efrosan aircraft of the era. The type was powered by the lacklustre Milos engine and as such, performance at altitude was lacking. Entering service in 1941, the Efrosan Air Force would utilize Stallions as long-range bomber escorts. Several were also shipped to the Royal Isles to assist in defending the nation from Coalition attacks.
.
In June of 1942, the RIAF (Royal Isles Air Force) - the primary user of the Stallion at the time, had proposed to re-engine the aircraft with their own Falcon Engine. Prototypes of the re-engined Stallion were faster and performance was increased at altitude. Unfortunately, by mid-1943, as Coalition Forces forced their way through Western Arbon, the Royal Isles had fallen to Bavarian Forces and were unable to ship their Falcon Engine to the Efrosan States. With no other options for the Stallion, the project was cancelled in late 1943, though, some Stallion I’s continued to see service with Efrosa until 1944.
.
With the arrival of motorjet fighters like the I-5B Reppu in the Far East, Omicron proposed a motorjet modification for the Stallion in 1945. The modified Stallion showed greater performance than any other Union aircraft then in service. The new aircraft was named the Super Stallion II to avoid confusion with the previous Stallion and entered service in late 1946 - the year the Ikanese began to fight on Efrosan Soil through Southern Stria. The K-49 was superior to the I-5B Reppu but was only available in small amounts during the start of the campaign. As production ramped up in ‘47 and '48, Efrosan Air Forces started pushing back the hoards of Ikanese aircraft invading Efrosan airspace.
.
As newer Ikanese aircraft like the Ka-5 Kosai entered service, the K-49’s days of superiority were numbered. Outperformed in every regard but turn and speed at high altitudes, the Efrosan Air Force sought a successor to the Super Stallion II fearing more Kosai would appear over Southern Stria. The K-49 remained the fastest (though only at high altitudes) Union fighter until 1952. The K-49 Super Stallion II would be slowly phased out until its eventual retirement in 1959.