try not to crash it
Note: this was made in KSP v1.3.0 - It may not function as intended in KSP 1.9.1
download ckan meta-file
This craft has been added to your downloads queue. Use the KX Mod to fetch it when you are next in KSP. Enable deferred downloads to make this the default way to download.
Download craft with the KerbalX Mod
how to install
re-download

Or find other craft;
- made by Galane
- that use the same mods | that are compatable | with similar mods
- that have a similar part count 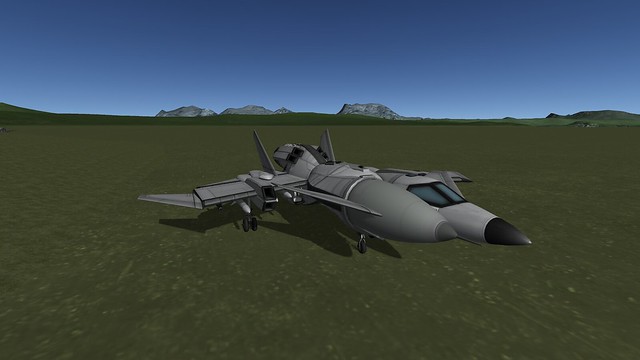 Something I threw together.

A mod aircraft called O-Twisted-FTP-BDA. Built with 83 of the finest parts, its root part is mk2SpacePlaneAdapter.

Alan Aerospace Recycling and Packaging is proud to present its first fighter jet! Our engineers spent about 30 minutes bolting together the cockpit, fuselage tanks, radome, wings, engines, and landing gear. Amazingly it flew pretty well, very stable. Too stable to actually hold its own in a 2v2 battle.

An hours long crash (many, many crashes) program was embarked to make this plane a contender. The fuselage, engines, wings and main gear remain as they were from the start. Canards, tailfins, intakes, weaponry etc underwent change after change until O-Twisted was able to reliably shoot down its nemesis, ADF-01 Falken Crewed.

Why this version has FTP appended to its name is after the initial arming of the prototype, and its subsequent defeat, our chief janitor and engineer said Frak This Poo! followed by We will not stop work on this project until it can FIGHT!

The forward tank may be filled with fuel but that will shift the CG forward and reduce maneuverability. The tank is set to empty first so if you have a long flight to a fight, fill it. There’s an RTG embedded in the starboard wing. It, along with the ECM pod under the starboard wing, is critical to left-right balance due to the BDA radome weighing less than the MK1 cockpit.