try not to crash it
Note: this was made in KSP v1.9.0 - It may not function as intended in KSP 1.9.1
This craft has been added to your downloads queue. Use the KX Mod to fetch it when you are next in KSP. Enable deferred downloads to make this the default way to download.
Download craft with the KerbalX Mod
how to install
re-download

Or find other craft;
- made by EvenFlow
- that are also pure stock
- that have a similar part count
Hangars that contain this craft
Download Queue | Real Aircraft | sph | Full Scale Stock Craft | military stock DISCLAIMER: THIS CRAFT REQUIRES DOCKROTATE FOR SWING-WING FUNCTIONALITY ALTHOUGH YOU CAN ALSO FLY IT OUT OF THE BOX IN THE STOCK GAME.

DISCLAIMER: Please use DockRotate version 1.4.1.10 for best results, later versions have issues with retaining autostruts after rotation and will produce odd wobbly behavior after changing the sweep.

INSTRUCTIONS (Please give them a read, at the very least the section on operating the wings):

The Tomcat has extremely comparable performance to my other jet fighters. The fairing drag bug in 1.4.2. hampers it’s top speed a little but as soon as it is fixed the plane should get very close to it’s real-life performance in terms of speed. Due to it’s unconventional wing layout and behaviour it has a few small details worth knowing before you take it to the skies and buzz some towers.

v1.0 - Initial release.
v1.1 - Some tiny details polished out, missing autostruts added where possible.
v1.2 - Nose assembly smoothed out.
v1.3 - Ventral fins aligned properly, strutting improved.
v1.4 - Minor changes to the tail section to make it appear smoother.
v1.5 - Changes to the tail section and nacelles to make them appear smoother overall.
v1.6 - Aerodynamic improvements, top speed increased by about 5m/s overall.
v1.7 - Visual tweaks made to improve the accuracy. The TCS now has a single visor instead of two (Two visors were introduced in the D variant), shape of the Phoenix missile fairings improved, tailhook assembly improved. Minor visual tweaks to the control surfaces were made.
v1.8 - Wing root pylons straightened out, structures housing the gear updated to better reflect the actual aircraft.
v2.0 - Major overhaul of the whole airframe. Airframe reinforced, wing gloves remodelled, wings refurbished to appear cleaner and more accurate, wing sweep corrected to match the real aircraft, horizontal control surfaces updated. I highly recommend updating your craft if you have downloaded a previous version.
v2.1 - Aerodynamics improvements, antennas are now modelled better.
v2.2 - Tiny changes to the positioning of the fuselage panels in some places to increase the overall smoothness.
v2.3 - Significant changes. Removed some unaesthetic seams and added some details in the horizontal stabilizer section. The stabilizers themselves are now slightly anhedral like in the actual Tomcat.
v2.4 - Areas around the intakes were modified to make them appear smoother.
v3.0 - Complete rework of the nose section, the replica is now fitted with a cockpit which closely resembles the real F-14.
v3.2 - Major changes to the fuselage. It is now about 0.4m wider and more consistent with the real F-14.
v3.3 - Changes to the drop tanks, detailing added.
v4.0 - The canopy has been remade to give it a proper teardrop shape, some panel lines on the wing gloves were remade, wing oversweep added for storage, the TCS pod moved further forward to match the real airframe.
v5.0 - Added VF-31 camouflage, rebuilt the nosecone section, added a LANTIRN pod on the left wing glove pylon.
v6.0 - Tail section remade. Engine nacelles moved lower, horizontal stabilizer supports made thicker and more rectangular as in the real jet. VX-4 Evaluators paintjob added, stores and LANTIRN pod removed, might add them in later. Minor changes to the nose section.
v6.1 - Removed some strutting near the wings since the docking port connections seem far more solid now, this should enable variable sweep in 1.8+ 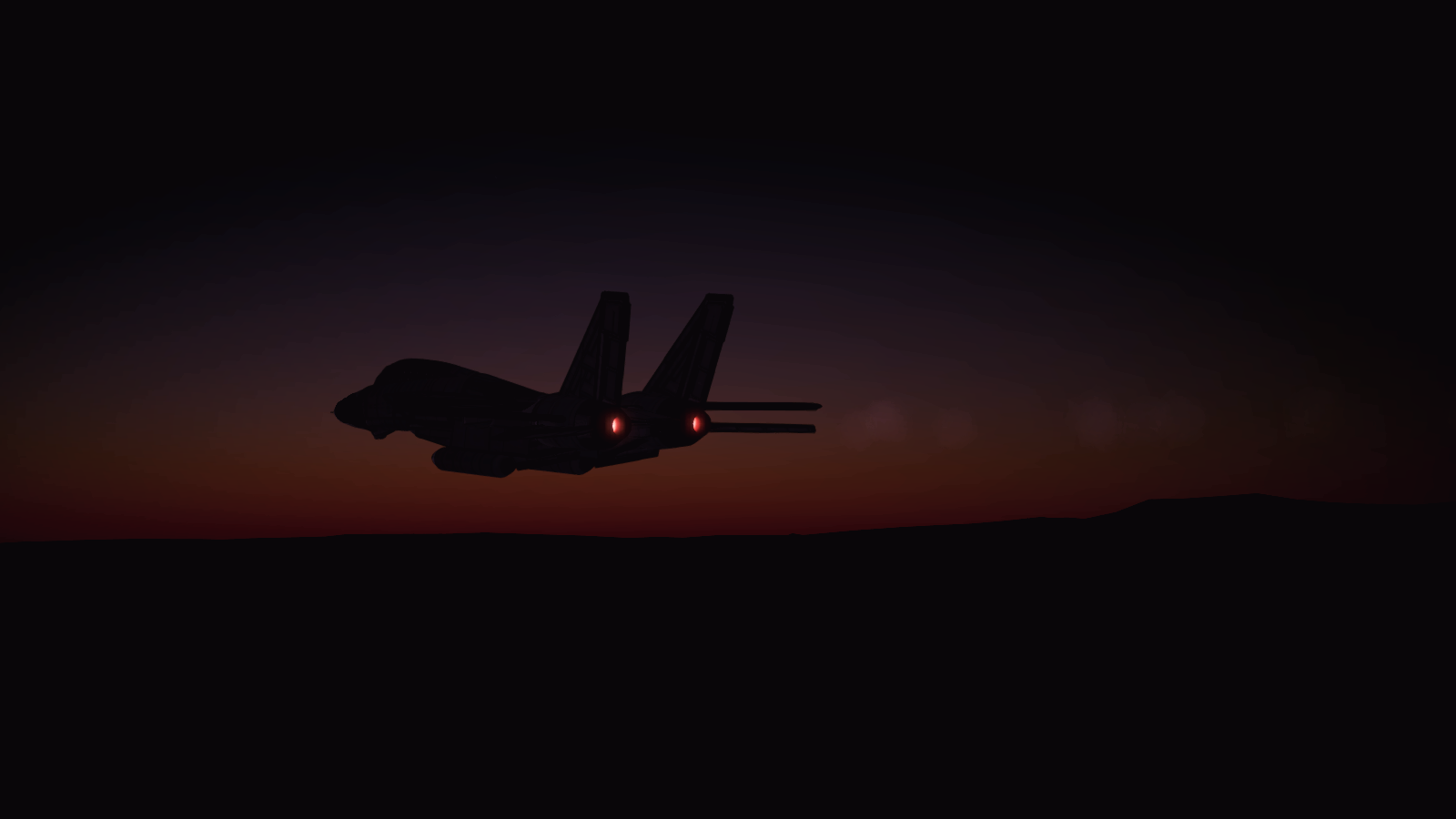