try not to crash it
Note: this was made in KSP v1.1.3 - It may not function as intended in KSP 1.10.1
This craft has been added to your downloads queue. Use the KX Mod to fetch it when you are next in KSP. Enable deferred downloads to make this the default way to download.
Download craft with the KerbalX Mod
how to install
re-download

Or find other craft;
- made by Castille7
- that are also pure stock
- that have a similar part count
Hangars that contain this craft
Mobile Craft Hangar | Sector 7's Watercraft Hangar 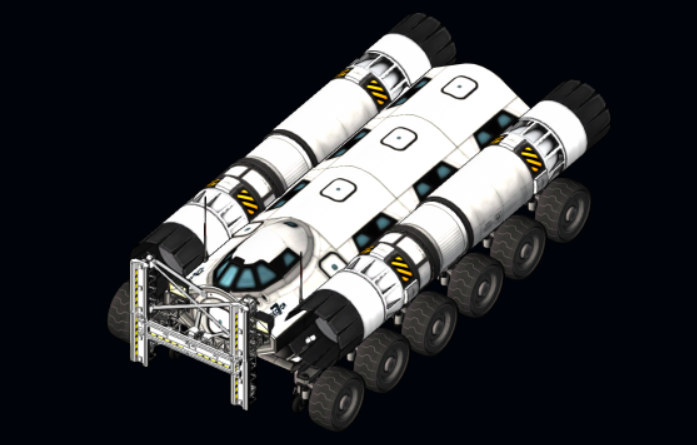 In the early stages of this project the Suspension Bridge was not structurally sound for the reentry from saved games or when switching craft and as I strengthened the designed the part count climbed causing lag, this

caused for design changes and new ideas. I then decided to try building the bridge on piers and this to was not working well because of reentry from a saved game on the water as mentioned before. The bridge is a far cry

from what I would have liked but it’s a functional Bridge that can be constructed. Often I used the Aqua Tram II for aligning the Bridge but in the end it was not necessary for the Bridge completion. Note: I am releasing the

Pier section without knowing if it will actually work. I did notice during testing that it can float free without the foundation mounted to the Ocean Floor and it survived reentry once during testing.

Operation: I first brought Rover 7 to the coastline and then constructed the bridge straight off the rear of the runway starting with a Bridge Entrance then adding the center sections and then the Bridge Exit (Bridge Entrance).

When docking them together alignment is very critical, sometimes they connect easily sometimes not. Much like connecting in space connect them very gently. Next shutdown the two engines on the Bridge Entrance

manually so that all remaining engines will be running in one direction. The Bridge Entrance is a little shaky I makes turns near 10 m/s the center sections are much easier to handle. The Rover I am using must climb on the

Bridge ramps slowly. The Mobile Lift is slow to start and can’t make tight turns but it is placing Bridges nicely. When the Mobile Lift releases the Bridge it will collapse, at this point just return to the tracking center and

remove the debris unless you have a 0 debris setting then this is unnecessary. I may have left out some needed information, please feel free to ask questions if needed.

A stock aircraft called Aqua Tram II. Built with 122 of the finest parts, its root part is mk2Cockpit.Inline.