What's this slidery thing next to the download link?
When the slider is in the ON position clicking the download link will download the craft and open the download tab so show you more info
When the slider is in the OFF position clicking the download link will just open the download tab without downloading the craft
erm....why? Once you've downloaded a craft the slider will automatically move to the OFF position, so you can then open the download tab without re-downloading the craft each time. If you want to re-download the craft there will be a link in the download tab
It also acts as a visual que to remind you which craft you've already downloaded, if it's in the OFF position (red) you've already downloaded the craft. As you are not logged in it will only remember what craft you've downloaded in this session. Login if you want KerbalX to remember your downloads between sessions.
SPH
compatible
stock ship
#Stock #Turboprop #Airplane
Craft Details
Class
Ship
Type
SPH
Mass
77.35t
Cost
205,253.0
No. of Stages
4
Crew Capacity
unmanned
Part Count
640
No. of Struts
78
Root Part
Mk1FuselageStructural
Built in KSP
0.90.0
Size
50.4 x 12.42 x 35.63
Science Parts
T, A
Resources
ElectricCharge
IntakeAir
LiquidFuel
Oxidizer
XenonGas
Science Parts
Thermometer x5, Accelerometer x1
full parts list

try not to crash it
Note: this was made in KSP v0.90.0 - It may not function as intended in KSP 1.12.5
This craft has been added to your downloads queue. Use the KX Mod to fetch it when you are next in KSP. Enable deferred downloads to make this the default way to download.
Download craft with the KerbalX Mod
how to install
re-download

Or find other craft;
- made by Azimech
- that are also pure stock
- that have a similar part count
Hangars that contain this craft
Dev's Pick | [username] Approved | Stock turboshaft engines, airplanes and helicopters. 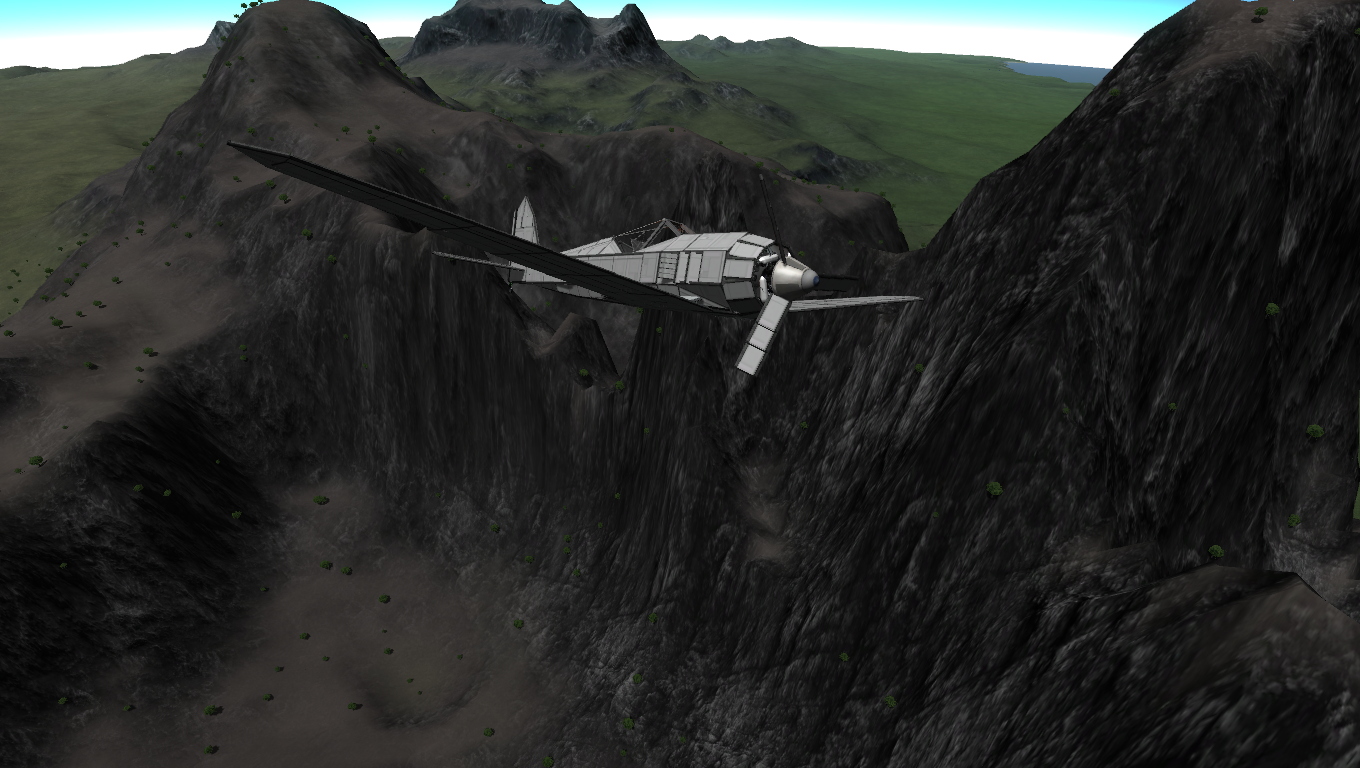 Here’s my fourth turboprop airplane, the 77I-Fw 190A! Born on February 25 2015. An even better and more powerful engine than the previous type, this one uses the PO8R: 8 blowers & 16 turbine blades, with a 3 bladed prop, producing 170kN! Very easy to fly, much easier than the previous one! This one is pretty close to the original in shape, although very large and without a radial engine. Why? Because we can’t build radials yet!

This is an improved version of the Fw 190A 1.0, the Fw 190A2. Born on February 26 2015. It’s got an improved prop for more high altitude performance, less mass and A LOT more fuel: 2700kg in the drop tanks and 3000kg behind the chair, for a total of 11700kg fuel.
Flying time increased from 25 to 45 minutes at full power. A lot of extra piping makes sure that all the blowers keep running even if tanks are unevenly drained.

Instructions: Use the first stage to start the engine. Go full power, use ailerons and rudder to keep the plane straight. It will lift off by itself at roughly 30m/s. The second stage is to lose the undercarriage, it will just drop them. Makes for very cinematic belly landings :-)

This plane needs only minimal trim at sea level and is very docile and stable. Don’t fly with SAS! During take-off, keep tail low! Use rudder and aileron to keep the plane balanced on the runway. In flight, use trim! The engine vibrations confuse the SAS. By the way, real pilots … :-P

Warning: just like in real life, doing aerobatics at high speed may result in sheared off wings!

Top speed? Haven’t tested it yet. Remember, this plane is gigantic and very heavy, but not with the scaled power of the original. Unity/KSP need some adjustments in the physics department to be able to build small. Top speed will probably be around 70m/s at 7500m.

A stock aircraft called 77I-Fw 190A2. Built with 640 of the finest parts, its root part is Mk1FuselageStructural.